AnandTech takes a look at the new MacBook Pros released at WWDC last week and focuses on the new non-removable battery design. Apple first introduced the non-removable battery into the 17" Unibody MacBook Pro last fall with mixed reactions from the community. Apple's reasoning behind making the battery custom and non-removable has been the ability to incorporate a larger battery that will provide even longer battery life. They've also argued that most laptop owners do not carry spare batteries.

Anandtech does a good job exploring the technology behind the design:

Apple did some clever work on its own here. Standard lithium ion batteries are made up of cylindrical cells, similar to AA batteries. The problem with these batteries is that they waste a lot of space within a notebook (try cramming a lot of cylinders into a box, you end up with wasted space). This wasted space translates into larger batteries than are necessary, which makes for larger notebooks.

They found the 15" MacBook Pro got an additional 46% of battery capacity with no additional weight. Improvements were dramatic in their benchmark testing: 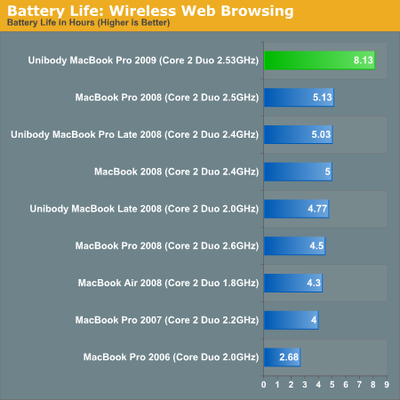 The new 15" MacBook Pro clocked in at over 8 hours in their light load benchmark. The findings did carry over proportionately in their more intensive tests compared to the older models. Andandtech concludes with a very positive impression of Apple's latest revision:

Ever since I first looked at the power consumption specs of Nehalem I thought it didnt make any sense to buy a new, expensive notebook before Arrandales launch in Q4 2009/Q1 2010. While performance will definitely increase considerably with Arrandale, Apple just threw a huge wrench in my recommendation. The new MacBook Pro is near perfect today. If you need a new laptop now, thanks to its incredible battery life, I have no qualms recommending the new MBP.