The release of the Safari 4 Beta yesterday has generated a massive number of comments. Here are a few interesting tips, tricks and observations. 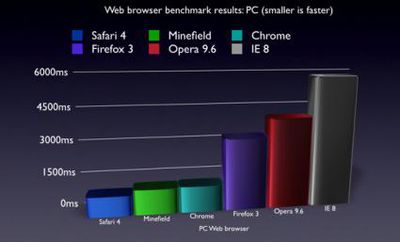 Javascript is a key scripting language that is heavily used in interactive websites such as GMail and MobileMe.

We previously discussed the inclusion of CSS Animation into Webkit and its long term implications. Well, the latest Safari 4 beta incorporates these new features which allows you to view these impressive demos that use CSS/Javascript (Safari 4 or comparable browser required):

Finally, those who are still trying to get used to the new Safari 4 changes might want to follow these tips:

Safari 4 Hidden Preferences - how to move the tabs back to the bottom, restore the blue loading bar, turn off URL autocompletion, Google Suggest and more. (Original site is down - content copied here.)
1Password - How to get 1Password to work in Safari 4