It seems despite all the anticipation about Turn-by-Turn GPS routing for the iPhone, an App already exists in the App Store that delivers this basic functionality.

XRoad Co.'s G-Map U.S. West and G-Map U.S. East apps were released into the App Store back in October and January, respectively.

The G-Map application is the first on-board GPS navigation solution to be made available for iPhone and iPod Touch download. This cutting-edge GPS-enabled application features an intuitive user interface with functions essential to the mobile consumer. Unlike other network mobile navigation services, there is no monthly fee involved and it makes instant route guidance without interruption. No internet or wi-fi connection needed to get you to the desired destination.

The app seemed to have slipped through the radar due to some major issues with the 1.0 version and it seems the turn-by-turn aspect was only recently added. Early iTunes comments for the application consisted of 1 star reviews that indicated the app simply didn't work.

On February 7th, however, XRoad released a 1.2 version update for the app which seemed to correct the major errors and added real-time turn tracking. The most recent reviews have ranged from 3-5 stars. 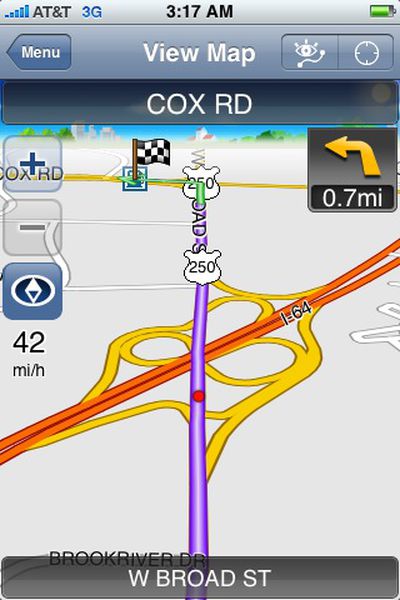 We briefly tested the app, and it does indeed provide turn-by-turn directions (distance countdown to each turn) by way of GPS. Local points of interest (Food, Fuel, etc.) can be found, addresses can be searched, routes can be edited, detours added, and types of roads can be avoided (highways, toll roads, etc.). If a turn is missed, the route is recalculated. The app even is said to have 3D Images of major intersections (we were unable to verify). Notably absent, however, are voice prompts to let you know when the next turn is.

The 800-900 MB applications each cost $19.99 and carry regional maps for the Western and Eastern halves of the United States (Europe coming soon). By having actual maps stored on the device itself, it does not require the use of an active internet connection to pull mapping data (like Google Maps). While the app claims to support the iPod Touch, we are uncertain how this would be accomplished as it lacks a GPS.

This video from the developer shows how the app works:

Unfortunately, this doesn't necessarily mean that Apple has loosened the restrictions in the App Store. The notable absence of voice prompts is attributed (in XRoad's FAQ) to Apple's "strict strategy which prohibits any real time guidance". In fact, the App even warns you on launch to "not operate this device while driving". We wonder if this FAQ entry may have pre-dated the release of the 1.2 update, however, as the company seems to lump both turn-by-turn navigation and voice-prompts in the prohibition.

We will see if Apple's restrictions remain in place when Sygic submits their GPS navigation app to Apple.

Note, while we have briefly tested this application, we have not fully reviewed it and are not necessarily recommending this app for purchase.