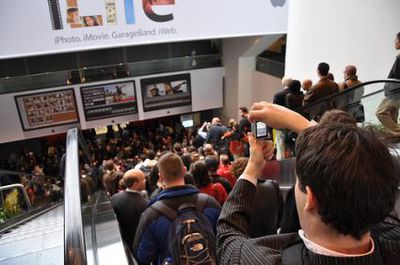 Macworld Expo 2009 officially ended on Friday, and media and attendees have since scattered back to their respective locations. Beyond the product announcements themselves, we certainly enjoyed meeting up with readers and other Mac personalities from around the world. Delicious Monster sponsored a meetup for our readers and the following companies provided giveaway prizes: Dr Bott, Speck, Beejive, Iconfactory, Just Mobile, and Ten One Design. Thanks to them.

The fight for 2010 seems to be on as CNet has confirmed that CES is organizing a Mac-themed area next year and is actively recruiting Mac exhibitors. Meanwhile, IDG/Macworld has already opened expo-pass registration for Macworld SF 2010 and appears to be offering free floor passes at this early date (normally $25-$45).

Thursday September 29, 2022 12:38 pm PDT by Juli Clover
Tony Blevins, Apple's vice president of procurement, is set to depart the company after he made a crude comment about his profession in a recent TikTok video, reports Bloomberg. Blevins was in a video by TikTok creator Daniel Mac, who was doing a series on the jobs of people he spotted with expensive cars. After seeing Blevins in an expensive Mercedes-Benz SLR McLaren, Mac asked Blevins what ...
Read Full Article • 390 comments