We're wrapping up our coverage from Macworld, and here is a diverse collection of items that may be of interest. 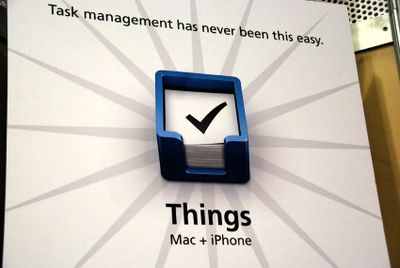 Cultured Code released the 1.0 version of Things alongside a version update to their iPhone app [App Store]. The Mac application won Best of Show and offers an "elegant and intuitive" task manager for organizing to-dos, notes, due dates, and projects. Things 1.0 for Mac is $49.95 and the iPhone companion application is $9.99.

Gryphon Corporation was showing off Ampli Phone, a passive amplifier for the iPhone. The scientifically designed horn amplifies the sound coming out of your iPhone without the need for any additional power source. The cradle for the iPhone allows room for cables to keep it powered and the entire unit can be turned on its side for watching video. Comes in black or white and is available for $29.95.

Music Skins provides officially licensed band decals that can be applied to your iPhone or iPod. Made from 3M vinyl and adhesive technology, they can be applied and removed without leaving a residue. Prices per skin is $15.00 and they are available for all iPod and iPhone models.

Psyclops introduced a new set of iPod nano silicon sleeves aimed at the 8-14 year old market. The company also offers an interactive online dance/music community in which kids can assemble their own dance videos by mixing available audio and video clips. These videos can be shared and downloaded to their iPods. Each case (example photo) comes with a unique code to unlock special dance moves. The company will also releasing an iPhone App that allows kids to create and share their videos on their iPhone or iPod touch.
[ 56 comments ]

Monday February 6, 2023 10:13 am PST by Juli Clover
Apple today released new tvOS 16.3.1 and HomePod 16.3.1 software updates, with the software coming two weeks after the tvOS 16.3 and HomePod 16.3 updates were released. According to Apple's release notes for HomePod software 16.3.1, the update includes general performance and stability improvements. Notes for tvOS 16.3.1 are unavailable as of yet, but are probably similar to the HomePod...
Read Full Article • 148 comments