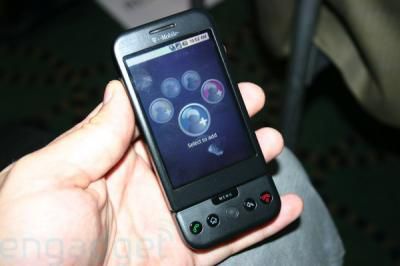 Image from Engadget
Google and T-Mobile have introduced the first Android-based mobile phone today called the T-Mobile G1. T-Mobile held a press conference which is available for online streaming. T-Mobile's press conference provided quick overviews of the device and seemed to position the device directly against the Apple iPhone with developers discussing the openness of the platform without any approval process. The phone will be commercially launched on October 22nd alongside a large marketing campaign. Features discussed:

Walt Mossberg provides first impressions of the new device and describes it as a "versatile device which will offer users a real alternative in the new handheld computing category the iPhone has occupied alone." Other notes: