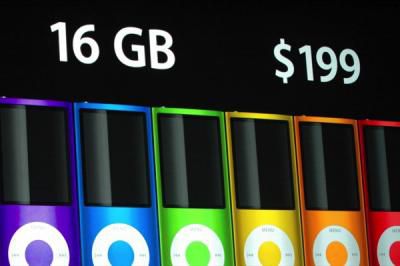 Image from Engadget
Apple announced the new iPod nanos today at their media event. The nano matches up with the circulating rumors of a taller, colorful design.

- The iPod classic would now only come in a 120GB model, replacing the 160GB and 80GB models that are currently available.
- The iPod shuffles have been revamped with new colors but the same price and storage.

The new iPod nanos should appear at http://www.apple.com/ipodnano/.

Wait, the headphone jack is now on the bottom! WTF?