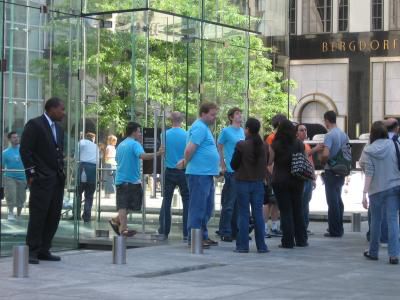 Apple's 24-hour flagship 5th Avenue retail store in Manhattan is in the process of shutting down for the night. An unusual move for the 24-hour store. Apple's retail page reflects the temporary shutdown:

Please note we will be temporarily closed Thursday, May 29 at 3:00 p.m. and will reopen Friday, May 30 at 9:00 a.m. During this time, please visit one of our other two Manhattan locations.

Employees are telling passersby that a commercial is being shot at the 5th Avenue Apple store. We've been told that Apple's 5th Avenue store has only been entirely closed twice in its history: the iPhone launch and the Leopard launch.

According to MacRumors sources, Apple is actually filming a commercial for the upcoming 3G-capable iPhone with filming to occur inside and around the 5th Avenue store.

Monday August 8, 2022 10:43 am PDT by Juli Clover
With the fifth beta of iOS 16, Apple has updated the battery icon on iPhones with Face ID to display the specific battery percentage rather than just a visual representation of battery level. The new battery indicator is available on iPhone 12 and iPhone 13 models, with the exception of the 5.4-inch iPhone 12/13 mini. It is also available on the iPhone X and the iPhone XS. Battery percent...
Read Full Article • 330 comments