'OpenMac' Promises $399 Headless Mac... But Not From Apple 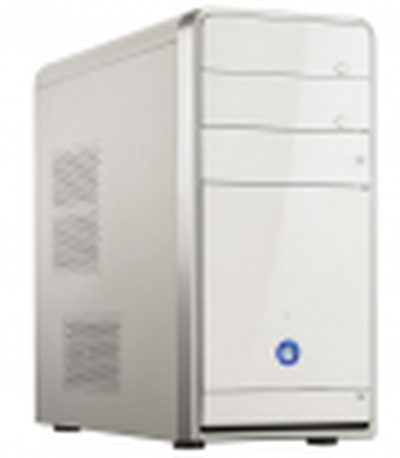 A company called Psystar has started advertising a $399 computer called "OpenMac" which claims to be a Leopard compatible Mac built from standard PC-parts. For $399, you get a tower computer with the following specs:

Many of the components can be upgraded, however. For example, the graphics card can be updated to a GeForce 8600GT 512MB for $155 more.

Psystar is marketing this as a cheaper and more expandable alternative to a true Apple Mac.

When comparing base configurations, the Mac Mini costs 150% of the price of the OpenMac while offering poorer performance, smaller storage space, and RAM. Not only that but the Mac Mini doesn't have the option for an nVidia GeForce 8600 video card like the OpenMac does so playing games on it is a lost cause.

The company claims that the machine is Leopard compatible with some "minimal patching" but does offer Leopard pre-installed. This is reportedly accomplished by using parts that are known to be compatible with Mac OS X Leopard, as well as the use of an EFI emulator.

With the EFI V8 emulator it is possible to install Leopard's kernel straight from the DVD that you purchased at the Apple store barring the addition of a few drivers to ensure that everything boots and runs smoothly.

Readers should note that these claims have not been independently verified, so this should not seen as an endorsement of this product. However, the technology appears to be derived from the osx86project, which has allowed hobbyists to install Mac OS X on their non-Apple PCs.

The concept is an interesting possibility, and will certainly draw the attention of Apple. The use of Leopard on non Apple-branded hardware is a violation of its End User License Agreement (EULA) and is specifically prohibited.

Update: Psystar appears to have changed the name of their product to "Open Computer". Whether this is a response to a direct request from Apple or is simply an internal company decision in recognition of possible trademark infringement remains unknown.

As a fairly recent switcher *2 yrs ago*, I feel exactly the same way. I really hope Apple reconsiders and gives us a mid range tower of some sort. I want a Mac, not a pc posing as a Mac.


But even Apple's own Macs *ARE* PCs posing as Macs. It's why they can run Windows straight out of the box. I'm afraid the days of Apple having unique hardware are over. Now they have unique cases and that's about the extent of it. They hold onto things like EFI in the Intel realm only so it's harder for you to stuff MacOSX onto your store bought PC clone. But it also keeps you from buying a PC version of an Nvidia 8600GT and throwing it in your new MacPro. It forces you to buy Apple's version of that card and pay considerably more money than the card is worth. These decisions are not consumer friendly. They are Apple friendly. They help Apple take more of your money and some of you even thank them for it. Try to find a sale on an Apple hardware item. Good luck save a few clearance sales and what not. They make sure their products cost the same everywhere they're sold. Apple's business tactics often even make Microsoft look consumer friendly. I can virtually guarantee if Apple were the #1 OS retailer out there they would be in the middle of their own Justice Department investigation for anti-trust maneuvering and trying to keep competitors from operating easily on their platform because their tactics are WORSE than Microsoft. They want to control every aspect of the software AND the hardware. Now you can say that's their right all you want and you're entitled to your opinion, but anti-trust laws exist for a reason in the United States. It's to keep a company from unscrupulous practices such as to artificially increase the price of a product far beyond its material value simply because no one else is allowed to create a competitive product or is made to jump through endless hoops to do so or to give up 30% of their profit off the top (Mafia style) just to sell a software app for their platform (read iPhone).

"But you can simply not buy Apple products!" I can simply not buy Microsoft products as well, but if I want to run certain software or I'm required to do so, my hands are tied and I'm forced to deal with Microsoft's OS or Apple products. Where is the open competition? There's a difference between creating a toy/radio and a software platform (i.e. computer or intelligent phone). A toy runs only its hard-wired or rom software. A platform loads new software just like any computer. Other than game consoles, since when are companies allowed to decide who and what can run on their computer systems? Honestly, I don't believe even game console makers should be allowed to decide that. It should be up to the public what software they support and buy. Countries like the United States grant PRIVILEGES to businesses such as patents that expire over time so they can make money off their ideas. They were NEVER meant to last forever or guarantee a company has more rights than a citizen. The government is for and by the people, not for and by Apple or Microsoft. Sadly, government corruption has lead to special interests screwing over the citizens of their own countries time and time again. And THAT is where the real problems lie with things like the DMCA, which counteract previous rulings such as "fair use" with analog copying, as if there were a real difference between analog and digital. They are methods, not different concepts.
Score: 1 Votes (Like | Disagree)

arn
right to clarify some things.

a EULA is that - and end-user agreement. The only weird thing is that this company will preinstall Leopard for you. So I could see Apple trying to get them in trouble for that. That being said, EULA's are of debatable enforcement. But I'd guess Apple would try against a company like this.

If they don't sell it with Leopard, I don't see how Apple can block it. They'd have to go after the end users buying/installing Leopard and it seems unlikely that would happen.

airjuggernaut
Well first off, it is illegal running Leopard or ANY OSX on a computer that does not have an apple logo.
Score: 1 Votes (Like | Disagree)
Read All Comments

Wednesday January 19, 2022 11:30 am PST by Juli Clover
It's now been a few months since the M1 Pro and M1 Max MacBook Pro models launched in October, and MacRumors video editor Dan Barbera has been using one of the new machines since they debuted. Over on the MacRumors YouTube channel, Dan has shared a three month review of his MacBook Pro to see how it has held up over time and how it's changed his workflow. Subscribe to the MacRumors YouTube ...
Read Full Article • 174 comments