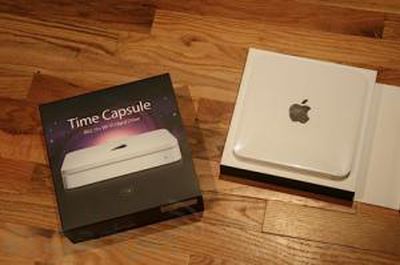 Image from Engadget
The first Time Capsules have started arriving, and some Apple Stores already have the new wireless backup solution in stock.

First impressions from Gizmodo and Engadget provide the following observations:

- New AirPort Utility software with easy to use step-by-step
- USB Drives connected to Time Capsule are available for backup
- Initial backup takes a while.
- An Apple Tech note recommends not interrupting your first backup. and notes that you can use an Ethernet connection for your initial backup.
- Can't transfer an existing Time Machine backup to Time Capsule.
- "so far it works as billed, clean and easy."

Apple has posted (PDF) the Time Capsule setup guide which provides detailed instructions on the the product's usage.

Time Capsule is a wireless backup accessory for the Mac that allows you to backup your computer's data. It was announced by Apple at Macworld San Francisco 2008 and is available in 500GB ($299) and 1TB ($499) models.

Sunday June 26, 2022 7:36 am PDT by Joe Rossignol
iPhone 14 Pro models are widely expected to feature always-on displays that allow users to view glanceable information without having to tap to wake the screen. In the latest edition of his Power On newsletter for Bloomberg, Mark Gurman said the feature will include support for iOS 16's new Lock screen widgets for weather, fitness, and more. "Like the Apple Watch, the iPhone 14 Pro will be...
Read Full Article • 142 comments

Sunday June 26, 2022 2:52 pm PDT by Joe Rossignol
Following the launch of Apple's new 13-inch MacBook Pro with the M2 chip, it has been discovered that the $1,299 base model with 256GB of storage has significantly slower SSD read/write speeds compared to the equivalent previous-generation model. YouTube channels such as Max Tech and Created Tech tested the 256GB model with Blackmagic's Disk Speed Test app and found that the SSD's read and...
Read Full Article • 370 comments

Monday June 27, 2022 3:38 am PDT by Tim Hardwick
Polish developer Michał Gapiński has released a new and improved version of his "Tesla Android Project" which brings Apple's CarPlay experience to more Tesla vehicles than ever before. According to Gapiński, version 2022.25.1 provides "100% functional CarPlay integration for any Tesla," and comes with several new features and bug fixes. The project now supports DRM video playback so that...
Read Full Article • 136 comments