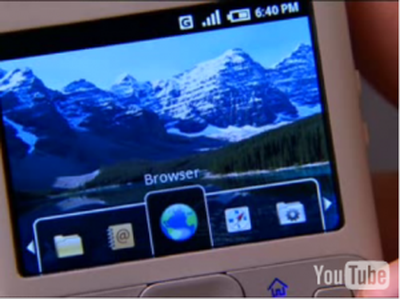 Documentation, SDK and first look videos are offered through the ">Android Project page. Most interesting, perhaps, is the Android Demo video which walks through prototype Android devices. Both a smaller and more advanced prototypes of Android phones are shown. They demonstrate functionality as well as detail capabilities as shown here:

Android's web browser is based on Webkit which also powers Apple's Safari browser. This means that web pages will render the same on Android's browser and Safari. Zooming/Scrolling with a touch interface is also supported as shown in the demo.

3d OpenGL support, as shown by a demo of id software's Quake.

The demo video shows other capabilities, such as tight integration into Google Maps. The first commercial phones based on the Android platform are not expected until the second half of 2008. Unlike the iPhone, the Android platform appears to emphasize openness and is encouraging of 3rd party application development. Despite early plans to keep the iPhone closed to 3rd party development, Apple has announced that a 3rd party development kit will become available for the iPhone in February 2008, though what restrictions it may likely entail are not yet known.

The Android SDK and emulator for Intel Macs is available for download.

Thursday May 13, 2021 12:10 am PDT by Sami Fathi
Apple has fired Antonio García Martínez, an ex-Facebook product manager and author of the controversial book "Chaos Monkeys," following public and internal calls for removal and investigation due to past misogynistic statements, The Verge reports. Apple hired Martínez earlier this week to join its ads team, however, comments that Martínez made in the past sparked condemnation from users...
Read Full Article • 333 comments

Friday May 14, 2021 11:52 am PDT by Juli Clover
Following the discontinuation of the iMac Pro, Apple also appears to be discontinuing Space Gray "Magic" accessories that it sold separately alongside the iMac Pro. The iMac Pro was the only Space Gray Mac, and Apple designed special matching accessories for it. The Space Gray Magic Mouse 2, Magic Keyboard, and Magic Trackpad all now say "While supplies last" in small wording at the bottom...
Read Full Article • 332 comments

Thursday May 13, 2021 5:26 am PDT by Tim Hardwick
For as long as it's existed, Google Photos has offered free unlimited storage for uploading images at a reduced yet good enough quality for most users. From June 1, 2021, however, all photos and videos uploaded to Google accounts will count against users' cloud storage. If you've been relying on Google to back up your media library, it may be time to move that content elsewhere. This article...
Read Full Article • 107 comments

Wednesday May 12, 2021 10:03 am PDT by Juli Clover
Apple's M1 iMacs are set to start delivering to customers next week, and ahead of the official launch day, benchmarks for the machines have been showing up on Geekbench, likely from reviewers who are testing them. It will come as no surprise that M1 iMac benchmarks are right on par with benchmarks for the M1 MacBook Pro, MacBook Air, and Mac mini, coming in with an average single-core score...
Read Full Article • 292 comments