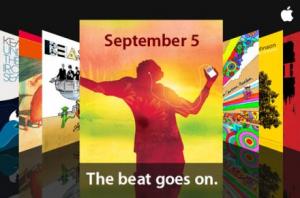 Several sites (Engadget, Crave) are reporting that Apple will indeed be holding a media event on September 5th, 2007 at 10 AM Pacific. (as predicted by Arstechnica)

Apple has been rumored to be holding a media event to launch the new iPods. Rumors have pinpointed both revised Nanos as well as a full-screen touch iPod.

The invite depicts "Cover Flow", which is expected to be arriving with the new OS X based iPods. The iPods have been the subject of a number of recent leaks (Nano photos, Interface Videos) which have attracted the attention of Apple Legal.