Apple has announced new iMacs at its press event today. The iMacs start at $1199 and come in 20 and 24" form factors, as rumored, and will feature a more professional look. 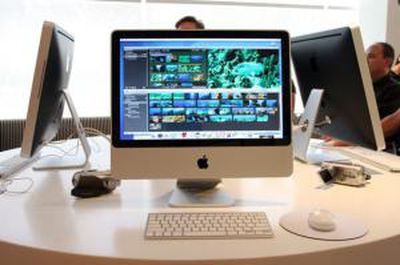 Also, Apple indicated that the keyboard that was previously leaked is indeed the new keyboard for the iMac.

Word of the iMac redesign first appeared in March from AppleInsider, though ThinkSecret was later able to corroborate the story and provide an exact date of release.

The new iMacs are available from the Apple Store (UK Store).

Update: Appleinsider has posted an extensive gallery of images of the new iMacs.

Thursday September 22, 2022 7:57 am PDT by Sami Fathi
A copycat version of the iPhone 14 Pro's Dynamic Island has arrived on Android's Google Play Store in the form of an app called "dynamicSpot." The app, still in beta, offers customers several different experiences at the top of their smartphones. In its current form, dynamicSpot offers playback control for songs, timers, battery status, and more features coming soon, according to the app's...
Read Full Article • 208 comments