Details and screenshots are beginning to emerge regarding Leopard (build 9A377a), which was seeded to developers on Friday.

According to the InsanelyMac Forum, the long list of known bugs plus bugs encountered during testing indicate that the build is a far cry from being ready for prime time. This casts doubt upon recent reports that Leopard will be ready for a late-March release.

Bugs aside, the new build did introduce some new features and interface improvements, namely in Automator, Spotlight, and the Sharing and Screensaver preference panes. Continue reading for highlights of these improvements.Automator
According to the InsanelyMac forum, Automator has seen enhancements, including a feature called "Watch Me Do." The feature can generate Automator scripts based on "everything" the user does, including mouse clicks. 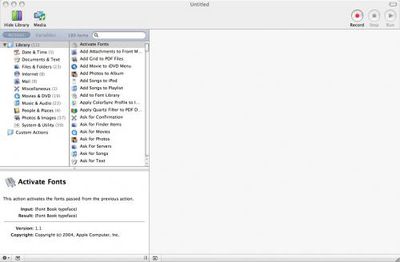 Spotlight
Apple states that Spotlight has seen performance optimizations and can run more powerful search queries in the latest build, however one of the most striking changes is a more iTunes-like interface.

Sharing
Apple has updated the Sharing Preference Pane with additional options for sharepoints and access controls.

Screensaver
While not groundbreaking, Apple has added yet another screensaver, named "Shell", to its growing list of included eye candy for while you're away from your computer.