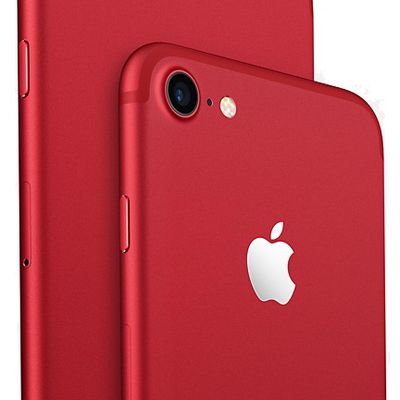 Sunday April 8, 2018 12:24 pm PDT by Joe Rossignol
iPhone 8 and iPhone 8 Plus models in a limited edition (PRODUCT)RED color will be unveiled as early as tomorrow, according to an internal memo distributed to Virgin Mobile employees in the UK and obtained by MacRumors. (PRODUCT)RED edition iPhone 7 and iPhone 7 Plus Virgin Mobile UK states that it will add the new smartphone models to its inventory system on Monday, April 9, coinciding with a launch announcement from Apple, which would likely be in the form of a press release. The memo doesn't mention a (PRODUCT)RED edition iPhone X, so there might not be one. The memo notes that there will be pre-orders, so it's unclear if the new color would be available immediately or begin shipping later in April, but it does appear that Apple will introduce the models this week. The information lines up with rumors about new red-colored iPhones from both Rosenblatt Securities analyst Jun Zhang and Steve Hemmerstoffer, who leaks information about mobile devices through his Twitter account OnLeaks. Ben Geskin also said the new color might be (PRODUCT)RED, after initially saying Blush Gold. Mark Gurman, a very reliable Apple reporter at Bloomberg News, has also corroborated this story in a follow-up tweet. Indeed should be this week. Nice scoop @rsgnlhttps://t.co/kdUxA2UzEp— Mark Gurman (@markgurman) April 8, 2018 Apple unveiled a (PRODUCT)RED edition of the iPhone 7 and iPhone 7 Plus in March 2017, but it may have decided to wait until April this year so that sales of the red iPhone 8 and iPhone 8 Plus models are fully reflected in its earnings results for the third
Read Full Article • 165 comments 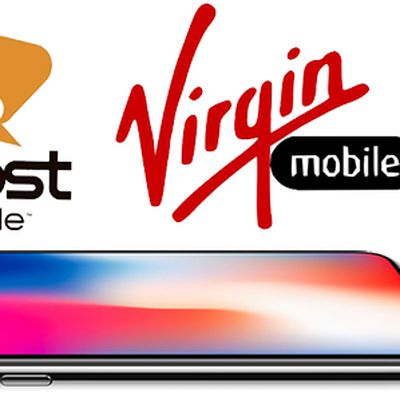 Friday October 27, 2017 10:31 am PDT by Joe Rossignol
Virgin Mobile USA today announced that it will begin taking iPhone X pre-orders on its website on Friday, November 3. The carrier originally said it would launch pre-orders today, in line with Apple and major carriers like AT&T, Verizon, and T-Mobile, but evidently the date has been pushed back by one week. Boost Mobile likewise announced that the iPhone X will be available to order on its website on Friday, November 10 in the United States. Virgin Mobile USA's so-called "Inner Circle" plan offers unlimited talk, text, and data with a few caveats: video quality is limited to up to 480p resolution, music streams at up to 500 kbps, and games stream at up to 2 Mbps. The carrier promises 4G LTE speeds for "practically everything else." Customers who use more than 23GB of data in a billing cycle will be de-prioritized during times and places where the network is constrained. Mobile Hotspot is available for an additional $10 per month, providing up to eight tethered devices with a dedicated allotment of 10GB of high-speed data to share each month. Unlimited calls to Mexico and Canada, and unlimited worldwide text messaging, can also be added for $5 per month. Virgin Mobile and Boost Mobile are both subsidiaries of Sprint and share the parent company's network in the United
Read Full Article • 7 comments

iPhone 8 and 8 Plus Launch at Virgin USA, Boost Mobile, and Over 25 Additional Countries on September 29

Friday September 15, 2017 11:52 am PDT by Joe Rossignol
Virgin Mobile USA today announced that it will begin shipping iPhone 8 and iPhone 8 Plus pre-orders on Friday, September 29, the same day the devices launch in 29 additional countries around the world. Virgin said its Inner Circle members will be able to pre-order the devices on Friday, September 22, but it's unclear if Apple will be accepting pre-orders on that date as well in the second wave of launch countries. Apple began accepting iPhone 8 and iPhone 8 Plus pre-orders at 12:01 a.m. Pacific Time for major carriers AT&T, Verizon, T-Mobile, and Sprint, in addition to SIM-free models. Virgin's date is one week later, but for the iPhone X, it will accept pre-orders starting Friday, October 27, the same day as Apple. The next countries include Andorra, Bahrain, Bulgaria, Croatia, Cyprus, Czech Republic, Estonia, Greece, Greenland, Guernsey, Hungary, Iceland, India, Isle of Man, Israel, Jersey, Kuwait, Latvia, Liechtenstein, Lithuania, Malta, Monaco, Poland, Qatar, Romania, Russia, Saudi Arabia, Slovakia, and Slovenia. Apple's online store doesn't operate in all of those countries, but iPhone 8 and iPhone 8 Plus should be available in limited quantities through authorized resellers and carrier partners where available. Virgin operates on the Sprint network. Inner Circle members get unlimited talk, text, and data for $50 per month, with a few caveats: video quality is limited to up to 480p, music streams at up to 500 kbps, and games stream at up to 2 Mbps. Virgin promises 4G LTE speeds for "practically everything else." Customers who use more than 23GB of
Read Full Article • 2 comments

Wednesday August 23, 2017 8:04 am PDT by Joe Rossignol
Virgin Mobile USA today announced that customers who bring their existing iPhone, and transfer their phone number from another carrier, will receive one year of unlimited talk, text, and data for just $1 with AutoPay enabled. The limited time promotion is available until August 31, 2017. The deal is also available to customers who purchase a brand new iPhone at full cost from Virgin Mobile, which sells the iPhone 7, iPhone 7 Plus, iPhone 6s, and iPhone 6s Plus for the same prices as Apple. Virgin Mobile also sells the iPhone SE for $279.99, which is $120 off its regular $399 price. Once an iPhone is verified as compatible with Virgin Mobile, which operates on Sprint's network, a SIM card will be shipped with instructions to install it and activate the device. SIM cards can be ordered for free on Virgin's website until Friday, September 29, at which point the starter kit will cost $25. Since Virgin Mobile USA shares Sprint's network, only CDMA versions of the following iPhone models are compatible: - iPhone 5s - iPhone SE - iPhone 6 and iPhone 6 Plus - iPhone 6s and iPhone 6s Plus - iPhone 7 and iPhone 7 Plus During the 12-month promotional period, so-called "Inner Circle" members will receive unlimited talk, text, and data with a few caveats: video quality is limited to up to 480p resolution, music streams at up to 500 kbps, and games stream at up to 2 Mbps. Virgin promises 4G LTE speeds for "practically everything else." Customers who use more than 23GB of data in a billing cycle will be de-prioritized during times and places where the network is
Read Full Article • 50 comments

Wednesday June 21, 2017 10:06 am PDT by Mitchel Broussard
Virgin Mobile USA is moving to an iPhone-only business model beginning June 27, and to entice customers to switch it's offering an entire year's worth of unlimited talk, text, and data for $1. Called the "Inner Circle," the unlimited plan is available until July 31, and only to customers who purchase a new iPhone and transfer their phone number to an Inner Circle plan. After their first year on the plan, users will switch over to the normal $50/month price tag. There’s iPhone. And then there’s everything else. At Virgin Mobile, we’re teaming with Apple to offer you nothing but the world’s most popular phone. Because life in the Inner Circle is about living big, expanding your horizons and pursuing your passions. And it starts with an iPhone you’ll adore. Pre-order your iPhone now, or head to an Apple Retail Store on June 27th to be one of the first members of the Virgin Mobile Inner Circle! Currently, Virgin Mobile offers a variety of iPhones in all storage capacities, including the iPhone SE (32GB for $279.00), iPhone 7 (64GB for $749.99), iPhone 7 Plus (256GB for $969.99), and others. The iPhones are up for pre-order on the Inner Circle plan today, and will ship on June 27, with the plan going into effect upon the iPhone's activation. The unlimited Inner Circle plan does have restrictions related to data throttling, becoming "deprioritized" in some areas after exceeding a certain data cap, and even risking service termination after specific amounts of off-network roaming are reached. Per the fine print on Virgin Mobile's website: - Plans are domestic only
Read Full Article • 54 comments
Archives
Newer Posts
Older Posts