Earlier this month, Twelve South announced its latest product for the Apple Watch, a travel tote and portable charging stand called the TimePorter. Starting today, Twelve South is launching the $50 TimePorter and has begun accepting orders for the accessory.

Just ahead of the TimePorter's launch, Twelve South shipped a TimePorter to me so I could share an early hands-on look at the product, which, in a nutshell, is one of the more useful Apple Watch travel accessories that I've used. 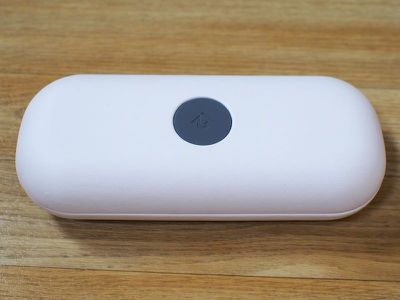 When it comes to size and design, the TimePorter looks a lot like a standard eyeglasses or sunglasses case, with the same general shape and dimensions. Covered in soft leather in either black or white, the TimePorter measures in at about six inches wide and an inch and a half tall and was comparable in size to some of the sunglasses cases I had on hand.

The size can also potentially be a downside because it is larger than some other stands and travel solutions, but at the size of an eyeglasses case, it's going to fit comfortably in most bags or backpacks.

At the top of the TimePorter, there's a cutout to accommodate the Apple Watch charger (you need to provide your own), and dual hinges at the side open it up, again like an eyeglasses case. Inside the TimePorter, there's a flexible silicone ridge for winding up the cable of the Apple Watch charger while the puck sits on the surface. At the sides, there are holes for the end of the cable that connects to the power adapter for charging purposes.

The inside of the TimePorter is lined in the same soft silicone the cable winder is made out of, so it's not going to scratch Apple Watch bands or whatever else is placed inside. The TimePorter can hold the full length of the 2m Apple Watch charging cable, or the smaller 1m cable (the smaller cable is in the photos).

Getting the charger inside the TimePorter is simple. There's a silicone plug at the top that's popped out (so this can be used as a case without a charger if desired) and the Apple Watch charging puck is placed inside to fit flush with the outside of the case. The cable is routed downwards into a groove and then wrapped tightly around the cable winder so it's out of the way. When charging, the cable can be unwound slightly so the USB end can be pulled through the end of the TimePorter to plug into an outlet or computer.

The Apple Watch cable and charging puck are securely in place in the TimePorter when wound correctly, but I did notice that the force of opening and closing the case or pressing on the top could cause the charger to be pushed out of place. This isn't a big deal, but some repositioning will be required here and there.

With the cable wound up, there is ample space in the TimePorter for the power adapter to be fully ensconced inside, plus there's room for storing additional Apple Watch bands. The power adapter sits at one end and bands fit next to it or under it (I tucked the prongs into one of the silicone slots for more space). There's also room for other accessories, like a small battery pack, but whether or not a battery pack would fit would depend heavily on its size.

I didn't have a battery pack small enough on hand, but if you bought a cheap one for the express purpose of charging the Apple Watch, it'd turn the TimePorter into a complete all-in-one charging solution.

Because it can be used in two ways, it's going to accommodate all Apple Watch bands, including the heavy Link Bracelet which isn't compatible with all Apple Watch charging solutions on the market.

I have a 38mm Apple Watch with bands in the smallest size, and these smaller bands are not able to take advantage of the TimePorter's features as well as larger bands. With the Milanese Loop, I was able to fit it around the body of the TimePorter, but I couldn't open the case very far to adjust the angle. With larger bands, the case can be opened further to angle it towards a bed when sleeping, but this positioning does put the Apple Watch in portrait mode, not landscape mode.

With the Apple Watch Sport band, it wasn't able to close around the body of the TimePorter so I could really only use it lengthwise, laid across the top of the stand. In this position, I was able to open the lid of the TimePorter to orient my watch into Nightstand mode. It worked well for my 38mm stainless steel Apple Watch with a Sport Band, but because it was only held up with the strength of the magnetic connection between Apple Watch and charger, it was precarious.

Lengthwise positioning with the case open for Nightstand mode likely won't work for all Apple Watch models, so it's best to think of the TimePorter as a stand that isn't going to work with Nightstand mode.

Twelve South has priced the TimePorter at $49.99, a competitive asking price for an accessory that's able to hold a power adapter, extra bands, and other Apple Watch odds and ends, in addition to serving as a charging stand.

Most travel solutions for the Apple Watch have been incomplete, offering features like storing the Apple Watch itself or including a built-in battery. Neither of these functions are particularly useful. When we travel, most of us wear our Apple Watches, and the majority of the time, we're traveling to places where power is available.

Twelve South recognizes that what people need when traveling is a versatile way to charge and a way to store a full charging setup and extra accessories in a convenient package, and that understanding of what's truly useful when traveling is what makes the TimePorter one of the best Apple Watch travel accessories I've seen yet.

The TimePorter can be purchased from the Twelve South website or Amazon.com for $49.99.

Note: Twelve South provided a TimePorter to MacRumors free of charge for the purposes of this review. No other compensation was received.

JohnApples
Not as bad as some of the other ones, but $50 for a souped-up glasses case still puts it over the "worth the money" line for me. Although, this did inspire me to create my own out of a spare glasses case I had. Works pretty nice!
Score: 3 Votes (Like | Disagree)

Klae17
I bought 10 ziplock bags for a dollar and one easily carries the cable, adapter, bands, and my night stand.
Score: 2 Votes (Like | Disagree)

I wish you guys got sent good products to review at least once in a while. 9/10 products that you review have too many drawbacks to them to buy.

If there's something specific you'd like to see us review, you can email us with suggestions!
Score: 2 Votes (Like | Disagree)

Edited to mention the price up top so people don't need to scroll down to see it. I didn't think $50 was too pricy compared to other Apple Watch stands and cases on the market.

You do realize you're too good for us rabble rousers, right? :-)
Score: 2 Votes (Like | Disagree)

2457282
I travel enough that I have enough cables to charge my Watch, Phone, and Pad all at the same time. Those cables and take up less room in my back back than this case. I see no benefit to this at all. when I get to my hotel room taking out 3 cables from a pocket in the backpack and charging my devices seem way easier and lighter than adding the bulk of this contraption. Usually I am a sucker for all the accessories, but this one I will pass.
Score: 2 Votes (Like | Disagree)

BornAgainMac
These are for the Gold watch customers. They use 12 core Mac Pro's for email and Facebook.
Score: 2 Votes (Like | Disagree)
Read All Comments