How to Use Google Lens on iPhone

Google Lens can now recognize over a billion items in the world around us, the search engine giant announced this week.

That's four times as many things that the AI-powered feature could identify when it was first launched last year, thanks partly to a huge number of Google Shopping products which have been added to its knowledge base. 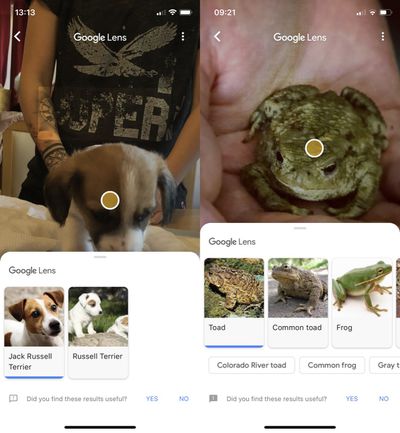 While its optical character recognition engine has been optimized to read more product labels, Google has also honed its machine learning and AI to recognize more animals, including common pet breeds.

In addition, you can use Lens to get more information about places as well as word definitions and translations of words. Google Lens can now also recognize people, Wi-Fi network names for auto-connecting, and geometric shapes. And if it isn't sure what an object is, it will offer up similar photos that match.

Google Lens originally appeared on iOS as part of Google Photos and could only be used on pictures you'd taken. However, last week Google added the feature to its flagship search app, and this implementation is better since it allows you to aim your phone's camera at things in your environment in real time.
Follow the steps below if you'd like to give it a whirl.

How to Use Google Lens on iPhone

If you want to withdraw Google's access to your camera and photos you can do so anytime by following these steps.

One can only wonder (shudder) how Google monetizes you with every picture you take using this service.

While Google is actually making use of AR for real world uses, Apple is making kids games with it.
Score: 9 Votes (Like | Disagree)

Kanyay
I pointed it at my wife's booty and it brought up her Wiki page. DAMN. Google's gone too far.
Score: 6 Votes (Like | Disagree)

Lazrhog
Not sure this is worldwide. No lens icon in the uk as yet

Edit: icon appears after closing the app and reopening it as @ventmore suggested

22 hours ago by Hartley Charlton