iOS 14: How to Set Google Chrome as the Default Browser on iPhone and iPad

Apple made a change in iOS 14 and iPadOS 14 that enables third-party browsers and email clients to be used as default apps, meaning users who don't get on with Safari or Apple's native Mail app can choose an alternative and it will be opened automatically whenever the system requires it. 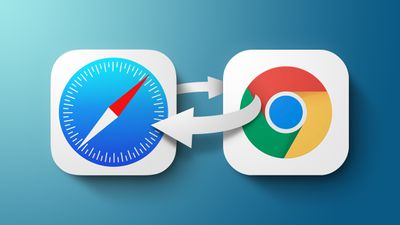 The latest version of Google Chrome now supports this ability, so anyone on iOS 14 can set Google's app as their default browser and it will be used to automatically open web page links that are tapped in other apps.

Note that these steps will only work if you have iOS 14 or iPadOS 14 installed.

After you've completed these steps, any app that tries to open a web page will launch Chrome instead of Safari. To change this behavior, simply repeat the steps and select Safari in the Default Browser Apps screen.

As of writing, no other third-party web browser provides an option to set it as the default browser for the iOS, but give it some time and the option will surely arrive for Firefox, Opera, and others.

Apple is expected to release iOS 14 and iPadOS 14 for all users later this month, and we could even see them announced next week at Apple's "Time Flies" event on Tuesday, September 15, where it is expected to announce the Apple Watch Series 6 and new iPads.

TheYayAreaLiving ?
I don’t trust Google.
Only trust in Apple.

Powerguru
Why would I change to chrome?
Score: 18 Votes (Like | Disagree)

katbel
Don’t trust Google, if I did I would have bought a cheaper phone with android
Score: 11 Votes (Like | Disagree)

fredrik9
It was finally time to give us this option. Won't switch from Safari though as it's still an amazing browser.
Score: 10 Votes (Like | Disagree)

I don’t trust Google.
Only trust in Apple.

Great, so now you can switch from a giant business-gobbling company's browser to a data-hoarding monster's browser. This is progress.

If you dont like the options, you should make a browser....
Score: 10 Votes (Like | Disagree)
Read All Comments

How to Remove the App Library From Your iPad's Dock

Monday January 24, 2022 12:00 pm PST by Tim Hardwick
Apple includes an App Library feature in iOS and iPadOS that shows you all of the apps that are installed on your iPhone or iPad in one place, both in an icon view organized into smart categories and in an alphabetical list. Since all of the apps are listed in the App Library, app icons and Home Screen pages can be hidden for a cleaner look. On iPad, Apple adds an App Library icon to the...
Read Full Article

How to Turn Your Old Mac into a Chromebook

Thursday February 17, 2022 3:17 pm PST by Tim Hardwick
If you have an aging Mac lying around that struggles to run the latest macOS and has stopped receiving security updates from Apple, it's possible to give it a secure second life by installing software that essentially turns it into a Chromebook. That's because Google has released an early access version of Chrome OS Flex, which offers a way to replace the operating system on older PCs and...
Read Full Article

Thursday September 9, 2021 5:42 pm PDT by Tim Hardwick
In iOS 15, Apple introduced a range of changes to its native iPhone web browser, Safari. Some of them were controversial, such as the decision to move the URL address bar to the bottom of the screen, but others were less so, and Apple eventually provided options so that users could customize the browser to suit their own preferences. Website tinting off (left) versus tinting on One of those...
Read Full Article

iOS 16: How to Change the Lock Screen Clock to Devanagari

iOS 16: How to Add Widgets to Your iPhone Lock Screen