Apple on Tuesday hosted its first-ever event at Steve Jobs Theater, where it unveiled the iPhone 8, iPhone 8 Plus, and iPhone X. 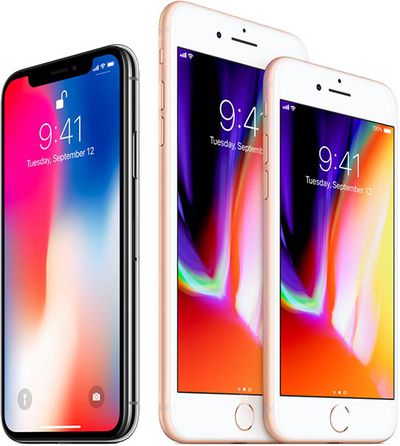 iPhone X is Apple's new flagship smartphone, with a stainless steel frame sandwiched between a nearly edge to edge OLED display on the front and glass on the back. iPhone 8 and iPhone 8 Plus also received a glass-backed design, but otherwise the devices look virtually the same as the iPhone 7 and iPhone 7 Plus.

If cost wasn't a factor, the iPhone X is undoubtedly the better smartphone in more ways than one. But the iPhone 8 and iPhone 8 Plus are very capable smartphones as well, so when there is at least $200 or $300 in savings to be had, it's worth considering which of the three smartphones best suits your needs. Find out ahead…

• Wireless Charging: All three iPhones have wireless charging based on the Qi standard. Each device can charge by being placed on an inductive charging pad, such as third-party options from accessory makers such as Mophie, Belkin, and Incipio.

• Water Resistance: All three iPhones have IP67-rated water and dust resistance like the iPhone 7 and iPhone 7 Plus.

• Rear Camera System: iPhone X and iPhone 8 Plus both have 12-megapixel rear-facing dual cameras consisting of a telephoto lens and a wide-angle lens with ƒ/1.8 aperture. Both have quad-LED True Tone flash, optical zoom, digital zoom up to 10x, and support for Apple's new beta Portrait Lighting feature.

• Front Camera Sensor: While the iPhone X's new TrueDepth system as a whole is a significant change, the front-facing camera itself is a 7-megapixel sensor with ƒ/2.2 aperture, Retina Flash, and 1080p HD video recording on all three iPhones. The difference on the iPhone X is support for Portrait Mode selfies.

• Memory: iPhone X and iPhone 8 Plus are believed to have 3GB of RAM, while the iPhone 8 likely has 2GB of RAM.

iPhone X vs. iPhone 8 and 8 Plus: What's Different?

• All-Screen OLED Display: iPhone X is Apple's first smartphone with an OLED display, which has benefits such as improved color accuracy and contrast ratio, true blacks, and a much higher 1,000,000 to one contrast ratio. And without bezels, beyond a notch for the TrueDepth front camera system, the iPhone X is nearly all screen.

iPhone 8 and iPhone 8 Plus still have LCD displays with top and bottom bezels like every iPhone before them, but they do gain True Tone functionality like the iPhone X. True Tone automatically adapts the color and intensity of the display to match the color temperature of the light in its surrounding environment.

• New Size: Despite having a large 5.8-inch display, the iPhone X's all-screen design allows it to be between an iPhone 8 and iPhone 8 Plus in both size and weight. For that reason, the iPhone X is the best choice for a smartphone with the maximum display size vs. one-handed usability.

• Face ID / TrueDepth: Apple replaced Touch ID with Face ID on iPhone X. Simply raise the device, look at it, and swipe up on the screen to unlock the device or authenticate your identity for Apple Pay. Apple said there's a one in a million chance the facial recognition system could be duped by a stranger.

• No Home Button: Given the lack of a Home button, the iPhone X has an elongated side button. Siri is activated by double tapping that side button, or by saying "Hey Siri" as previously. Other gestures include swiping up to return to the Home screen, swiping up and pausing to view multitasking, and tap to wake.

• No Gold: iPhone X comes only in Space Gray and Silver.

iPhone X has many of the best features of an iPhone 8 Plus, including a larger display, yet the device is closer to an iPhone 8 in size.

iPhone X benefits from far superior display technology and the TrueDepth system, which powers Face ID, Animoji, and Portrait Mode selfies. But the iPhone 8 and iPhone 8 Plus are equally as fast, support wireless charging, and still have a Home button with Touch ID for those who prefer fingerprint authentication.

Apple markets the iPhone X as the "future," and that's likely true for its smartphones, but it'll cost you an extra $200 or more to get there.

fizzyfizz
I'll stick with the 8. I can't get past that notch overlapping photos and videos.
Score: 16 Votes (Like | Disagree)

Hermes Monster
That list of what's different for your $/£200 doesn't make great reading.

I'll wait another year for an upgrade on the upgrade.
Score: 8 Votes (Like | Disagree)

I'll stick with the 8. I can't get past that notch overlapping photos and videos.

Doesn’t do that unless you tell it to. You can choose letterbox or full zoom.
Score: 7 Votes (Like | Disagree)

BMcCoy
I'll stick with my SE.

I like: squared, not curved, screen corners,
no notch cutout in my videos
A home button with TouchID
a headphone socket
A sensible price
Score: 7 Votes (Like | Disagree)

N1 apple.
Since the EUR gained value to the USD how is 799€ justified for the LCD iPhone? Like I said, I'll be a happy S8 owner soon. Goodbye iOS.

QCassidy352
Good write up, thanks. The iPhone x seems totally underwhelming compared to the 8. "What's different" is an alarmingly short section of the write up given the two or three hundred dollar difference. Also, although edge to edge screen is beautiful, I consider the loss of the home button and touch ID to be pretty severe negatives.
Score: 6 Votes (Like | Disagree)
Read All Comments