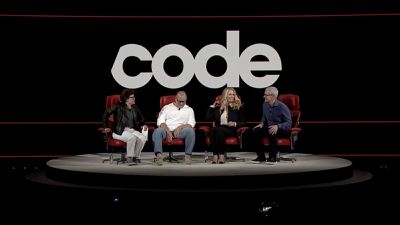 Responding to a question from Swisher about what they believe Jobs would think about the current state of the world, Powell Jobs opined that he would not have been happy about the polarization that increasingly dominates discourse.

I would say not only the polarization, not only the fact that people are really coming to blows within families and communities and our country, but also just that he loved our country so much.

He loved California so much, but he loved our country. He loved the idea of America. He loved what it allowed the individual and the communities to become. He loved the unfetteredness of it. He loved the personal freedoms and liberties, but also the connectedness and responsibility for each other.

It was very important to him to be able to give something back to the human experience, and I think he would not be quiet about it.

On the topic of user privacy, Cook reflected on how Jobs set the standard for Apple:

Steve really ingrained in the company in the early days the importance of privacy, and it has only grown with every year that has passed since then. I think it was at D8 that he spoke about privacy here, in 2010 I think it was, and he put it in such eloquent and simple terms.

It means asking people's permission, asking them repeatedly, and it has been at the heart of how we view privacy. And so you know, we believe that privacy is a fundamental human right, and we see a world where privacy takes a backseat, and you have this sort of surveillance kind of mode everywhere, that this is a world where people begin to do less and think less. They begin to alter their behavior because they know they're being watched. And this is not a world that any of us want to live in.

I think he saw that, and saw that well, and I have every reason to believe that he would have put up a good arguments in good fights along the way.

Ive spoke a bit about care in design and how he and Steve believed in taking great care with even the smallest details because it was the right thing to do.

I think it's easier to understand carelessness which is I see it being a disregard for people, you know. Carelessness to me is just seeing people as a potential revenue stream, not the reason to work immoderately hard to really express your love and appreciation for the rest of the species.

So for us in our practice of design, I think care is very often felt, and not necessarily seen. And I think, and I know it's something that I think the three of us feel strongly about that sort of care, that is, I mean Steve talks about the carpenter, the cabinet maker that would finish the back of the drawer, and it's that you're bothered beyond whether something is actually publicly seen.

You do it not because there's an economic interest. You do it because it's the right moral decision and I think it's, I think, particularly as a designer. I think it's very often in the very small quiet things like worrying about how you package a cable.

The only reason, I think you're very aware that the reason you are there is because I think, our species deserves better.

Additional discussion topics included Steve's outlook on the genesis of creation, his structure for Apple that persists to this day, his belief that Apple should own its primary technologies, and more.

Steve was a big motivator for me to get into tech. I looked up to him to a degree.

So much has changed. This interview seems like a bit much.

But I lost my dad last year. Nobody seems to want to hear me talk about him because his death makes them uncomfortable. So I at least hope this brings 3 of his friends some comfort to talk with each other about their special friend.
Score: 13 Votes (Like | Disagree)

symphony
I've never seen Jony Ive in an interview or on stage before, always in a white vacuum.
Score: 12 Votes (Like | Disagree)

antnythr
It must be exhausting talking about "What Jobs would think" all the time
Score: 10 Votes (Like | Disagree)

abowlby
After Steve: How Apple Became a Trillion-Dollar Company and Lost Its Soul while a potentially polarizing read was definitely an interesting look at two of the four souls on that stage.
Score: 7 Votes (Like | Disagree)

macduke
Out of the three answers, Ive was all over the place. His preoccupation with stupid things like cable packaging, while his non-functional keyboards and extreme minimalism over functionality were rampant at Apple, is why he’s gone and we’re all better off for it. The good portions of his design acumen remain in his former employees and the rational now have a seat at the table as a counterbalance. I appreciate him in many ways I’m now glad that he left.
Score: 6 Votes (Like | Disagree)

steve09090
If anyone has ever opened a MacBook Air or Pro and especially the Mac Pro, they realise how much of the "Back of the Drawer" effort has been put in. Apple redefined design into good design. All of the other manufacturers had to follow suit just to get their devices as thin. Before that, everyone else was just lazy (poor design).
Score: 6 Votes (Like | Disagree)
Read All Comments