The latest models of the Apple TV have dropped to record-low prices on Amazon, beating previous lows by $20, while the latest iPad mini and the Apple Pencil 2 have also matched all-time low prices in a weekend sale. 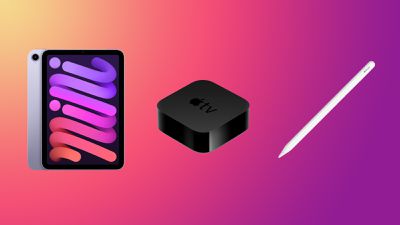 The 32GB Apple TV is currently available for $129.99 at Amazon, while the 64GB model has dropped to $149.99. Both prices represent $49 discounts from Apple's regular pricing.

Finally, Amazon has a new all-time low price of $99.00 on the second-generation Apple Pencil, a $30 discount from its normal price.

For even more deals, be sure to visit our Apple Deals roundup where we recap the best Apple-related bargains of the past week.

Because AppleTV+ is only ONE app. That would be like saying, with AppleTV+ app (or any single app of your choosing) on many things, I don't see why iPhone is still being sold. Obviously iPhone does a whole lot more than any one app available on iPhone.

As soon as you offer a bit of differentiation rationale to justify any of those, the same generally applies to AppleTV. It's much more than only one app that can run on it and/or only an airplay receiver from something else.

Can someone get by without it? Of course. They can also get by without Macs, iPhone or iPad. The latter two will easily substitute for each other- I actually use iPad mini cellular with buds as my phone (too)- no iPhone. But I also have several Macs- all of which can pretty much do exactly the same stuff as the others, so why have more than one? It's much more convenient to pack a Mac laptop when traveling etc. It's much more powerful to work on Studio Ultra when at home... and it's a full-time computer for others when I happen to be away from home.

I also have several AppleTVs. I could readily hook a Mac or iPad mini to a TV to get a lot of the same benefits but prefer to let AppleTV do that job in a permanent, full-time way vs. only when I happen to be at home (with Mini) or only when I can free up the Mac from using it for whatever else I do with it.

Incidentally, I use my AppleTV every day but I haven't used the AppleTV+ app more than a few times since it was released... pretty much solely if I want to watch Apple events. I will do a bit of airplay to it sometimes but that would also rank very far down the list of my uses. If both were eliminated as AppleTV offerings, I pretty much wouldn't miss them at all... and still use AppleTV pretty much every day.
Score: 12 Votes (Like | Disagree)

The amount of telemetry smart TVs collect is insane, I’d much rather keep my TV a dumb panel and keep the brains that have internet access in a different box. Also I’d rather just have to worry about things like panel quality when picking a TV than also having to matrix that with what smarts it comes with. Also I keep TVs for a while, being able to upgrade what I’m using for smart functions separately from the panel is nice

And the AppleTV is butter smooth to use, probably the best streaming box experience around. And it acts as a homekit hub too

So there’s a few reasons
Score: 10 Votes (Like | Disagree)

fbr$
Apple TV with at least A14, 128 GB and the ability to download movies/series to watch them offline and we have a deal.
Score: 7 Votes (Like | Disagree)

Schnort
Arcade isn't worth much at all.

Apple TV is still being sold because its probably going to have a better experience than whatever underpowered processor is in the TV.

erikkfi
Excellent price for the cheapest model, but that 64GB tier has got to go. If you want more storage than that, the $130 jump to 256GB throws the whole value proposition out of whack. Which is why I haven't bought one of these yet.
Score: 6 Votes (Like | Disagree)

Because a lot of people don’t want to us the smart TV option and Apple TV works much better.
Score: 5 Votes (Like | Disagree)
Read All Comments