Apple is adding virtual memory swap to iPadOS 16, allowing apps on the recent iPad Pro and iPad Air models to use free and available storage as extra memory for demanding workloads. 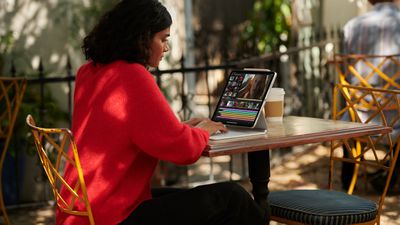 With iPadOS 15, certain apps can use up to 12GB of memory on the highest-end M1 ‌iPad Pro‌ which has 16GB of total RAM. With ‌iPadOS 16‌ and virtual memory swap, Apple is significantly increasing the amount of memory an app can use by tapping into available storage on the device.

For ‌M1‌ ‌iPad Pro‌ models, apps can use up to 16GB of memory for the most demanding workloads. Fifth-generation ‌iPad Air‌ models with the ‌M1‌ chip and a minimum of 256GB of storage also support the feature.

Virtual memory swap and the higher memory ceiling join a list of features coming with ‌iPadOS 16‌ that are exclusive to the ‌M1‌ ‌iPad Pro‌ and ‌iPad Air‌, including Stage Manager. In fact, Apple told Digital Trends that ‌Stage Manager‌ relies on this virtual RAM swap.

‌Stage Manager‌ is an entirely new way for pro-users to use their iPad, allowing users to have multiple windows of an app opened at once, overlaid on top of each other. ‌Stage Manager‌ also enables full external display support on iPadOS for the first time.

Update: Apple's footnote on its ‌iPadOS 16‌ preview page originally stated that it was the fourth-generation ‌iPad Air‌ that supported the feature, but the error has been corrected.

Same here, absolutely disappointed by this decision. If this is how Apple decides to treat its 2-yr-old ”Pro” device, I’m never buying another ”Pro”.

Your "Pro" device does and will still do what you thought it was doing, you were never promised anything forward.

You based your decision on what it did for you not what it might do in the future (as nobody could guess), your 2 year old device wont suddenly stop being pro or doing it's work.

You are missing on features from the new OS, features you didn't have before, but the HW you have is still as good and as zippy on the new OS.

Bottom line, ALWAYS buy stuff for what they are capable the day you buy them, never buy things hoping they will do more in the future.
Score: 15 Votes (Like | Disagree)

Basically me with A11 iPhone. Seemed like a great idea at the time. Bionic chip, huge performance upgrade over A10. Now almost every feature is A12 and higher

But the glaring problem was that it was a first gen neural enabled phone and the golden rule with apple is… never buy first gen products.


First ipad was weak as hell. First retina iPad was basically an iPad 2 but with performance issues. First retina iPhone was a just a 3GS powering 4x the pixels. All sucked.

I had all those iPads and iPhones and they were great when released. And well reviewed. None of them "sucked" as far as I remembered, until they got a few years old and were no longer up to the task of the current software. Which is basically every product (though the OS/hardware requirements moved more quickly in general back then).

Saying "never buy the first gen iphone/ipad/mac" is mostly meaningless- at this point, any iPad, iPhone, Mac, etc is both a first generation of something, and a second, third, etc etc etc generation of something else. In 2 years people will be complaining about the current 13" iPad Pro missing some feature and "you should've skipped it" because it was the "first generation" product with a mini LCD display, or it had the "first generation" M1 chip. Your advice is basically to never buy anything, something better might be released later ;)
Score: 8 Votes (Like | Disagree)

Kylo83
Amazing all this power for YouTube and Facebook, I mean the iPad is so slow we needed this lol give us final cut
Score: 7 Votes (Like | Disagree)

Bummer it's just M1. I've got the 2020 A12Z iPad Pro and loads of free storage. Did a whole computer as the dev transition kit, but hamstrung relative to M1. Just down to memory capacity?

I knew buying the 2020 was a kinda bad deal at the time, being just the 2018 with only an extra graphics core, and that the next would probably whoop it's ass. But I didn't realise it was such a big jump to the M1 coming to iPad and I'd then have big feature skips rather than just a general performance hit on a pretty damn powerful iPad. ?

Same here, absolutely disappointed by this decision. If this is how Apple decides to treat its 2-yr-old ”Pro” device, I’m never buying another ”Pro”.
Score: 7 Votes (Like | Disagree)

Amazing all this power for YouTube and Facebook, I mean the iPad is so slow we needed this lol give us final cut

Because RAM and virtual memory on flash storage are the same thing :rolleyes:
Score: 6 Votes (Like | Disagree)
Read All Comments