Apple today announced that it is officially discontinuing the iPod touch, an out of date accessory that has been replaced by other devices like the iPhone and the iPad. Apple says that it is eliminating the iPod touch because its capabilities are available across Apple's product lineup. 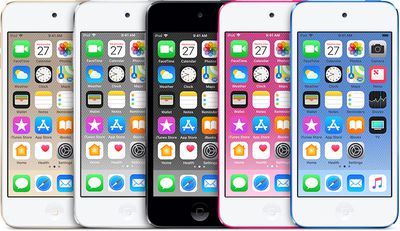 The iPod touch is the last remaining device in the iPod lineup, and it has not been updated since May 2019, three years ago. In a statement, Apple's marketing chief Greg Joswiak said that the "spirit of the iPod lives on" in other Apple products.

"Music has always been part of our core at Apple, and bringing it to hundreds of millions of users in the way iPod did impacted more than just the music industry -- it also redefined how music is discovered, listened to, and shared," said Greg Joswiak, Apple's senior vice president of Worldwide Marketing. "Today, the spirit of iPod lives on. We've integrated an incredible music experience across all of our products, from the iPhone to the Apple Watch to HomePod mini, and across Mac, iPad, and Apple TV. And Apple Music delivers industry-leading sound quality with support for spatial audio -- there's no better way to enjoy, discover, and experience music."

Apple introduced the first iPod 21 years ago in October 2001, and at the time, it was a revolutionary music device that put thousands of songs in the pockets of Apple fans. Apple introduced many iterations of the iPod, including the iPod Shuffle, the iPod nano, and the iPod touch, but all have since been phased out and discontinued.

The iPod touch will still be available for purchase through Apple's website, Apple retail stores, and through Apple Authorized Resellers while supplies last.

The seventh-generation iPod touch is priced starting at $199 and it features a 4-inch display with thick bezels, a standard Home button with no biometric unlocking mechanism, and an A10 Fusion chip. It is available in Pink, (PRODUCT)RED, Space Gray, Silver, Gold, and Blue.

Caliber26
I'll never forget the excitement I felt during the height of the iPod revolution. My favorite iPod ever:

As far as I am concerned, iPod died with iPod nano, last updated on 2012 and discontinued on 2017.

To me, iPod touch is iPhone without cellular. Outside limited commercial niche use cases, its necessity became increasingly questionable as the market is flooded with refurbished unlocked iPhone SEs (2nd gen) in the same price point.
Score: 24 Votes (Like | Disagree)

rpmurray
Damn, and I was waiting for them to release the M1 Max version.
Score: 22 Votes (Like | Disagree)

Tuesday May 10, 2022 1:00 pm PDT by Juli Clover
Apple today announced the official discontinuation of the iPod touch, the last remaining device in the iPod lineup. The sunsetting of the iPod touch marks the end of a 21-year era, that all started with the 2001 iPod. Subscribe to the MacRumors YouTube channel for more videos. Over the years, Apple introduced multiple iterations of the iPod, including iPod mini, multiple versions of the iPod...
Read Full Article • 284 comments

iPod Touch Already 'Sold Out' in Some Configurations After Being Discontinued

Wednesday May 11, 2022 7:22 am PDT by Joe Rossignol
Just one day after Apple announced it is discontinuing the iPod touch, which remains available "while supplies last," the portable music player is now listed as "sold out" in some configurations on Apple's online store in the United States. For example, the iPod touch can no longer be ordered with 256GB of storage in any color on Apple.com in the United States, and the (PRODUCT)RED model...
Read Full Article • 75 comments

Wednesday May 25, 2022 12:52 pm PDT by Joe Rossignol
A few weeks after Apple announced it is discontinuing the iPod touch, the company has started to remove the device from its website in some countries. It is no longer possible to access the iPod touch's product page on Apple's website in countries such as Canada, Belgium, Finland, France, Germany, Italy, Spain, Singapore, South Korea, Sweden, Switzerland, and many others. The page is still...
Read Full Article • 15 comments

Used iPods Likely Not Worth Keeping as Collectors' Items Despite Uptick in Value After Discontinuation, Data Shows

Tuesday May 24, 2022 6:29 am PDT by Hartley Charlton
After the last iPod touch was officially discontinued earlier this month, the entire range of iPod models have seen a slight uptick in value, but devices in used condition continue to experience heavy depreciation. According to trade-in pricing data from over 40 U.S. independent tech resale companies gathered by SellCell, iPods have depreciated by 89 percent on average since their launch,...
Read Full Article • 65 comments

Deals: Get the Best Discounts on Apple's Just-Discontinued iPod Touch Before They're Gone

Tuesday May 10, 2022 9:30 am PDT by Mitchel Broussard
Apple just announced the discontinuation of the iPod touch, and with the end of this product's lifecycle you can expect to see stock quickly begin to dwindle at all retailers. For this reason, we're highlighting the last best deals you'll find on the iPod touch. Note: MacRumors is an affiliate partner with some of these vendors. When you click a link and make a purchase, we may receive a small ...
Read Full Article • 30 comments