Justine Ezarik, known as iJustine on YouTube, today shared an inside look at the Apple Fitness+ studio in Santa Monica, California. As part of the tour, Ezarik interviewed Apple's head of fitness Jay Blahnik and a few Fitness+ trainers.


British GQ also visited the Fitness+ studio and interviewed Blahnik and Apple's operations chief Jeff Williams, who oversees the Apple Watch team. According to the publication, the 23,000-square-foot building is outfitted with numerous aerial camera rails and lighting rigs, along with robots that aid in filming the workout videos.

Launched in December 2020, Apple Fitness+ features a library of workout videos, with new content added weekly. The subscription-based service is available through the Fitness app on the iPhone, iPad, and Apple TV in over 20 countries, with pricing set at $9.99 per month or $79.99 per year in the United States. While completing a workout, Apple Watch metrics like heart rate and calories burned are shown on screen. 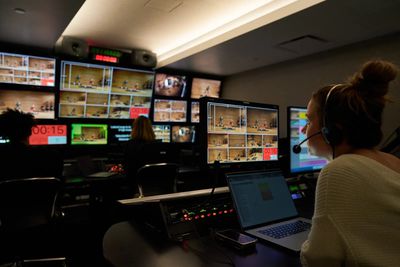 Image Credit: British GQ
"We had always been thinking about what a service like this would look like if it was built around Apple Watch at the center," Blahnik told British GQ. "And so we kept leaning into many of the things we've learned with Apple Watch, which is that people want it to be unintimidating. It needs to be friendly. It needs to be motivating."

Up to 30 new workouts and meditations are added to Fitness+ each week, according to Apple. Workouts range from five minutes to 45 minutes in length, with categories including high-intensity interval training (HIIT), yoga, strength, pilates, treadmill walking, treadmill running, rowing, dancing, cycling, core exercises, and mindful cooldowns.

blazerunner
I'm a simple man; I see iJustine, I tune out.

thatvirtualboy
Love Fitness+
However that video was pointless
Score: 15 Votes (Like | Disagree)

antiprotest
I don't see any problem with iJustine. She obviously presents a fan girl perspective and she doesn't deny it. She doesn't pretend to offer ultra-techinical critical reviews on anything, but she just gets excited over tech products -- not just Apple either, but pretty much everything. She's not a hypocrite. Not everyone's cup of tea, of course, but it is unfair to judge her by a standard meant for other types of content creators. And I don't think tech forum users should be high-minded or gatekeep.
Score: 14 Votes (Like | Disagree)

Jdizzle188
To echo another user here, I see anything with "iJustine" and I completely disregard the article, there are miles better technology bloggers and YouTubers, her enthusiasm at times is just too much

Here's a idea, Apple selects longtime real users to have new products and review them, not the usual lucky few
Score: 13 Votes (Like | Disagree)

TheYayAreaLiving ?
Apple Fitness+ is Tim Cook’s baby. The interview itself looks too cheesy. I did not get anything out of this video. This was more of an interview instead of a tour of the facility.
Score: 10 Votes (Like | Disagree)
Read All Comments