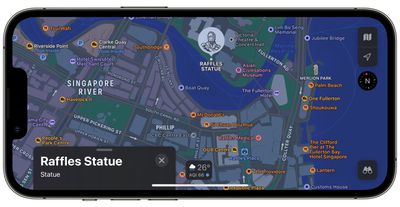 The expansion comes after 48 days of public testing, according to ‌Apple Maps‌ enthusiast Justin O'Beirne, marking the fourteenth time that Apple has expanded its new map data since its public launch in September 2018. Germany and Singapore are the twelfth and thirteenth countries to receive Apple's new map data, and Singapore is the first country in Asia to receive it.

O'Beirne reports that Apple's new map data now covers 18.4% of Earth's land area and 8.5% of the global population (or 673 million people worldwide). That's after almost four years of expansions and nearly eight years of data collecting. Based on the pattern of Apple's expansion, the next update is likely to consist of France and Monaco.

Apple's redesigned maps were first introduced in iOS 12, and since then, the Cupertino company has been working on expanding them. The updated Maps app offers up faster and more accurate navigation along with more detailed views of roads, buildings, malls, sports fields, foliage, pools, pedestrian pathways, bodies of water, and more.

incoherent_1
3.5 years of waiting and yet still no cycling directions. Cool.

However, it does seem to show the speed limit now, which is great and Google Maps does not provide in Germany.

Edit: I love how our building complex (completed in 2020) does not even exist yet according to Apple Maps haha:

So it took three and a half years to expand to the world's fourth-largest economy.

Canubis
Really appreciate this fine work and new details. Looks great!
Just wondering what takes them years to slowly rollout region after region. This seems like a perfect example of a problem money could solve. At least to my simple mind it seems like a process - once created and perfected - should be possible to nicely scale up and run in parallel by as many maps teams one can afford, all around the world to get their local knowledge.
Score: 4 Votes (Like | Disagree)

ifxf
as long as it doesn’t support downloading maps it is useless
Score: 4 Votes (Like | Disagree)

AndiG
Good update - but I think Apple Maps is too dark in dark mode.

Monday March 28, 2022 7:04 am PDT by Hartley Charlton
Apple has today begun new ground surveys across various regions of the United Kingdom, including London, Manchester, and Birmingham, to gather pedestrian data for Apple Maps (via Bloomberg). Apple will use cameras and sensors mounted on pedestrian backpacks to gather map data in Berkshire, Greater London, Greater Manchester, Staffordshire, and the West Midlands, across over 85 specific towns ...
Read Full Article • 89 comments