When it comes to downloading iOS software updates, Apple users can be reasonably divided into two camps: Those who manually seek out updates the moment Apple releases them, and those who are happy to let their device's Automatic Updates feature take care of everything in the background with minimal input on their part. 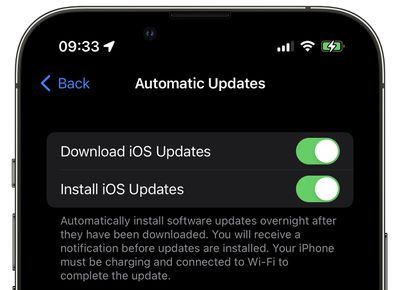 While it's generally acknowledged that manually tapping into Settings -> General -> Software Update is the faster option, Apple has never really explained why auto-updates tend to come through to users sometimes days or even weeks later – until now.

Interested iPhone user Mateusz Buda put this question in an email to Craig Federighi, Apple's senior VP of software engineering. In the email, Buda explained that he had turned on auto-updates, and yet after two weeks since the public release of iOS 15.4 he still hadn't received an update notification. "What conditions must be met for this function to work?" Buda asked. To his surprise, Federighi responded and was happy to explain.

We incrementally rollout new iOS updates by first making them available for those that explicitly seek them out in Settings, and then 1-4 weeks later (after we've received feedback on the update) ramp up to rolling out devices with auto-update enabled.

Given the number of iPhones and iPads in the world, it's not hugely surprising to hear that Apple's software update strategy proceeds in a staged rollout. By implementing an intentional delay of between 1-4 weeks for users with auto-updates turned on, Apple adds a level of protection for its servers so they aren't easily overloaded when a new version of iOS is released.

In a somewhat related point, made by several Redditors, Apple hasn't explained why some app auto-updates are also sometimes very late to be delivered to users, but perhaps the reasoning is the same: Server protection and an ability to action feedback before a wider rollout is complete.

These comments are so boringly predictable.
Score: 41 Votes (Like | Disagree)

contacos
I thought this was about "App" updates which has never worked for me either
Score: 20 Votes (Like | Disagree)

This isn't very unusual or surprising. In fact, third-party developers can opt in to a similar staggered app release feature. ('https://www.idownloadblog.com/2019/03/21/apple-macos-app-updates-phased-releases/')

a new Phased Release for Automatic Updates feature allows a developer to set their app update to reach one percent of users on day one, increasing from there according to the following schedule:

This way, developers get several days to see the impact of the update (and, if push comes to shove, pull it): do more crash reports come in? Is aggregate CPU or battery use up? Is more bandwidth being used on their servers? Etc.

For Apple's OS releases, it's basically:

At any step of the way, they can pull an update. For example, a lot of developer betas never make it to public beta.

I mean, if you want to look at it like that, yes. Early adopters are more likely to face serious bugs than late adopters. That… really isn't shocking, though. You don't have to be an early adopter if you don't want to.
Score: 20 Votes (Like | Disagree)

jprmercado
Interesting. I’d have thought that people who turn on automatic updates are the ones who would want the updates to be applied as soon as possible.

I turn off automatic updates because I want to be able to decide when I want to update, especially for major releases. [I typically update right away for minor releases, though.]

But the phased rollout does make sense from a capacity management and quality control standpoint.
Score: 17 Votes (Like | Disagree)

No. You realize that there's the whole beta program that the "guinea pig early adopters" beta test new releases well before the final release update is rolled out to the masses...right?
Score: 16 Votes (Like | Disagree)

senttoschool
This makes perfect sense. You can test as much as you want, but for a piece of software as complicated as iOS, real world users will still find bugs. If it's a breaking bug, at least you haven't pushed it to most people yet.
Score: 13 Votes (Like | Disagree)
Read All Comments