Honor has announced Earbuds 3 Pro that come with integrated temperature monitoring technology, a feature that has also reportedly been tested by Apple in AirPods prototypes. 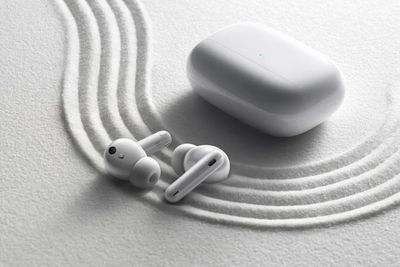 Market interest in building temperature measuring functions into earbuds has been mooted for some time now, as it could be useful for fertility tracking, keeping track of sleep, and in the future, it could also detect when a user has a fever.

Honor's $199 buds include a temperature sensor that combines with an AI temperature algorithm and can take a measurement that has about an 80% chance of achieving a ±0.3 degrees Celcius or less error, according to the company.

Tapping three times on the earbud can start a measurement, and a continuous measurement function is available. The Earbuds 3 Pro also feature an "abnormal temperature alert," although Honor's marketing materials stress that they are not for any medical purpose and still need to pass regulatory hurdles.

The earbuds hark back to an October 2021 report by The Wall Street Journal that claimed Apple is developing prototypes of AirPods with temperature sensors for monitoring a wearer's core body temperature from inside the ear.

The report noted that these in-ear temperature sensors could work in tandem with a rumored temperature sensor that could be included in this year's Apple Watch Series 8. However, individuals said to be familiar with Apple's plans told the The Wall Street Journal that AirPods with said health features are not expected to launch in 2022, and may never be released.

Honor unveiled its new noise-canceling Earbuds 3 Pro at MWC 2022 alongside its Magic 4 series of smartphones, "Pro" variants of which can be fast-charged wirelessly at 100W, allowing the phones to be charged to 50% in just 15 minutes. The Chinese company said it hoped to release its new products globally, but whether they will actually arrive in the US anytime is unknown.

HeavenDynamic
This shouldn't be legal
Score: 23 Votes (Like | Disagree)

given the fact how inaccurate ear thermometers are...

Exactly! As a healthcare professional, I can tell you the most accurate is a rectal thermometer. ;)
Score: 7 Votes (Like | Disagree)

NotTooLate
"80% chance of achieving a ±0.3 Celcius or less error" , what about the other 20% , is this 80% when its optimally placed in the ear ? I have a feeling that this 80% is the best case number and would not be anything remotely close to it in real life , but lets wait and see the reviews , at 200$ they have big competition to beat , but more options is always great to see !
Score: 6 Votes (Like | Disagree)

How so? I don‘t see how a body temp sensor is in any way problematic.

Look at the design. It is is a copy through and through. They are not even trying to hide it.
Score: 6 Votes (Like | Disagree)

ninetyCent
Can't wait! Thanks to thermometers in stylish earbuds, I'd know if I'm going into hypothermia when i shiver right after i pee.
Score: 5 Votes (Like | Disagree)

"I wish my headphones measured my body temperature", said no one ever

Someone might have said "I wish my thermometer played music while doing its thing", though.
Score: 5 Votes (Like | Disagree)
Read All Comments

Tuesday January 24, 2023 1:11 pm PST by Joe Rossignol
While the new Mac mini with the M2 chip has a lower $599 starting price, the base model with 256GB of storage has slower SSD read and write speeds compared to the previous-generation model with the M1 chip and 256GB of storage. A teardown of the new Mac mini shared by YouTube channel Brandon Geekabit reveals that the 256GB model is equipped with only a single 256GB storage chip, while the...
Read Full Article • 609 comments