AT&T today announced the launch of upgraded AT&T Fiber plans, which support speeds of up to 5 Gigabits for some customers. There are two separate plans, one "2 GIG" plan and one "5 GIG" plan, available to new and existing AT&T Fiber subscribers. 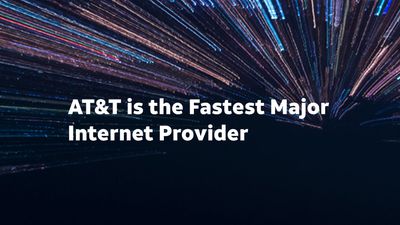 AT&T is enacting a new "straightforward pricing" policy, which means there are no data limits, no equipment fees, no annual contract, and no "deals" that will see prices increase at 12 months. These high-end plans include AT&T ActiveArmor internet security, "next-gen WiFi support," and HBO Max access.

With the launch of these new multi-gigabit internet plans, AT&T is calling itself the "fastest major internet provider." AT&T intends to continue to expand its faster connection speeds to additional customers, with plans to cover 30 million customer locations by the end of 2025.

What's the point of these? No WiFi can transport this kind of data. And who needs this for workstation-at-home work?

People with ethernet at home. Multiple people using the multiple WiFi access points at once on WiFi 6e.
Score: 39 Votes (Like | Disagree)

a m u n
What a difference.

Maclver
LMAO.... this is what is available in my area.... Ill stick with the Cox Gigablast...

I7guy
Go AT&T. Competition is great and hopefully will spur other ISPs to up their game.
Score: 25 Votes (Like | Disagree)

What's the point of these? No WiFi can transport this kind of data. And who needs this for workstation-at-home work?

I don't understand this mindset. Its like saying "Why pave the roads, cars can't go faster than 30 mph anyway" back before roads were paved. Something will always be a bottle neck.
Score: 18 Votes (Like | Disagree)

nutmac
I have AT&T's 300 Mbps fiber, downgraded after trying 1 Gbps for a couple of months. My family of couldn't stress the network to a point where we would benefit from 1 Gbps.

That isn't to say others wouldn't benefit, but before spending more money, one should understand what their true needs are. If everyone is on Wi-Fi, you probably can't get much faster than 700 Mbps even with the best Wi-Fi router.
Score: 15 Votes (Like | Disagree)
Read All Comments

Wednesday March 2, 2022 7:35 am PST by Mitchel Broussard
Flexibits this month is offering 75 percent off Flexibits Premium for new customers, including access to both Fantastical and Cardhop. This offer will run through March 31 on the Flexibits website, and the subscription supports apps across macOS, iOS, and iPadOS. Note: MacRumors is an affiliate partner with some of these vendors. When you click a link and make a purchase, we may receive a...
Read Full Article • 59 comments

Wednesday May 25, 2022 8:56 am PDT by Hartley Charlton
Leaker Jon Prosser today shared ostensibly accurate renders of the iPhone 14 Pro, providing the most accurate look yet at what the device could look like when it launches later this year. In the latest video on YouTube channel Front Page Tech, Prosser revealed renders of the iPhone 14 Pro made by Apple concept graphic designer Ian Zelbo, highlighting a range of specific design changes...
Read Full Article • 95 comments