Sunday will mark the 15th anniversary of Steve Jobs introducing the original iPhone at the Macworld Expo in San Francisco, and while the device revolutionized the smartphone industry, it's easy to forget how much the iPhone has improved since then. 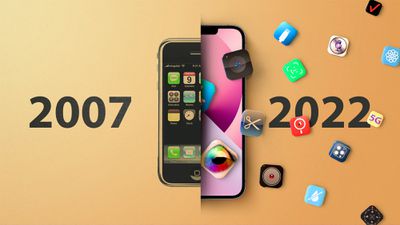 To celebrate the upcoming occasion, we've put together a list of 15 features the original iPhone didn't have when it was first announced.

Looking ahead, the iPhone 14 will get even more new features, so be sure to catch up on everything that we know so far.

The features keep getting richer and richer.

Tell that to Force Touch and cover flow.
Score: 15 Votes (Like | Disagree)

TheYayAreaLiving ?
The features keep getting richer and richer.

iPhone is my favorite Apple product in this world. I have been upgrading back to back since 2008 and I have not missed a year. iPhone definitely has come a long way. I also believe this was Steve Jobs's favorite product he worked on before introducing it to the world. ? ✊
Score: 13 Votes (Like | Disagree)

Starflyer
I pulled out my original iPhone and played with it today. The first feature I missed? Moving the cursor with the space bar.

rictus007
It was still way better than any other phone back then
Score: 10 Votes (Like | Disagree)