Now that Christmas has come and passed, many people have opened up a brand new iPhone, iPad, Mac, Apple TV, or Apple Watch over the past few days. In this article we've rounded up the current best deals on official Apple iPhone cases, Apple Watch bands, power bricks, MagSafe accessories, and more, which should all be helpful for new Apple device owners. The sales below will be found at Amazon. 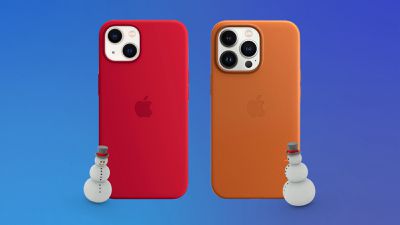 Wow, the cases pictured have a bump because the iPhone 13's camera bump is just so ridiculously big. That means even with a case on the phone it will still wobble on a flat surface when hitting on-screen buttons e.g. using the calculator app. This is the very reason I'm not buying an iPhone 13 series. Enough already with this madness.

Article is about deals on cases and watch bands. How you turned it into being about the camera bump and the phone wobbling (something that's been known since these phones came out 3 months ago) and your refusal to buy any of these models, is kind of strange and totally off-topic.
Score: 1 Votes (Like | Disagree)

TheYayAreaLiving ?
These are some nice sales that are going on. Basically avoiding paying tax $. Still not bad.
Score: 1 Votes (Like | Disagree)

I’m in the market for the clear MagSafe case that Apple makes since it seems like 3rd party cases don’t work on magnetized car mounts.

Any sales on those lately?

Mick-Mac
Wow, the cases pictured have a bump because the iPhone 13's camera bump is just so ridiculously big. That means even with a case on the phone it will still wobble on a flat surface when hitting on-screen buttons e.g. using the calculator app. This is the very reason I'm not buying an iPhone 13 series. Enough already with this madness.
Score: 1 Votes (Like | Disagree)