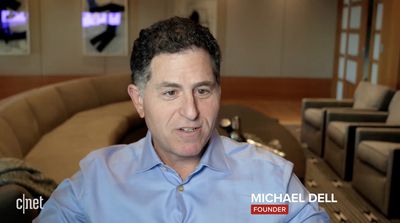 Dell CEO Michael Dell spoke to CNET, reminiscing about the time that Steve Jobs aimed to get Dell to license Mac OS to run on Intel-based PCs and how that might have changed the PC industry.

As the story goes, Jobs first approached Dell about a partnership after being ousted from Apple and establishing NeXT. Jobs wanted Dell to use the NeXT operating system on Dell PCs, and he claimed that it was better than Windows.

Dell told Jobs that it wasn't going to happen because there were no applications for it and "zero customer interest."

After Jobs rejoined Apple, he once again attempted a software licensing deal, trying to get Dell to license Mac OS. At the time, Jobs pushed Dell by telling him PC buyers could choose between Apple's software or Microsoft Windows.

"He said, look at this - we've got this Dell desktop and it's running Mac OS," Dell tells me. "Why don't you license the Mac OS?"

Dell thought it was a good idea and wanted to pay Jobs a licensing fee for every PC sold with Mac OS, but Jobs was worried about PC sales cannibalizing Mac sales because PCs were cheaper. Jobs instead wanted Dell to load Mac OS alongside Windows on every PC, which would have cost Dell hundreds of millions in royalties.

Dell smiles when he tells the story. "The royalty he was talking about would amount to hundreds of millions of dollars, and the math just didn't work, because most of our customers, especially larger business customers, didn't really want the Mac operating system," he writes. "Steve's proposal would have been interesting if it was just us saying, "OK, we'll pay you every time we use the Mac OS" - but to pay him for every time we didn't use it ... well, nice try, Steve!"

The royalty cost dissuaded Dell from the deal, as did the lack of a guarantee that Dell would continue to have access to Mac OS years in the future. Dell customers could be out of luck as the software evolved, with no way for Dell to offer support.

Dell said that had that deal gone through, "It could have changed the trajectory for Windows and Mac OS on PCs." In a 2005 interview, Dell said that if Apple "opened the Mac OS to others" Dell would be happy to offer it to customers, but that did not happen and Apple kept Mac OS exclusive to Macs.

Though a software deal was never reached, Dell said that he remained friends with Jobs over the years despite various arguments. Dell one time was asked what he'd do to fix Apple if he was CEO, and he said "I'd shut the company down and give money back to shareholders," which angered Jobs.

Jobs ultimately used the quote from Dell to motivate his team, which Dell respected. "I probably would've done much the same thing if I was in his position," Dell told CNET. "When the company you started is fighting for its life, you do whatever it takes."

Michael Dell's story about Mac OS X is featured in his newly published memoir, "Play Nice But Win," which also features stories of how he met Jobs, his infatuation with the Apple II, and how he developed a friendship with Jobs.

Freeangel1
YES!!
DO IT NOW!!
Mac Hardware SUCKS!! So many faulty and burned out video cards over the last 20 years.

I saw the future in Intel Chips.

Sometimes Jobs was the brilliant ideas and marketing man that we all know brought us the Macintosh, iPod, iPhone and iPad.
Other times, he was the absolute idiot who tried to stop third parties from developing for the iPhone, said people would never buy an E reader because people just don’t like reading, tried to call the original iMac the MacMan… and did this


That's what's wrong with mentality like yours. I don't know Michael Dell, and his business isn't nearly as rich as Apple, but he seems like a genuine person who is happy with his level of success. I'd rather be successful and happy, than be tortured and "misunderstood" for the sake of being branded a genius, and to win at all costs.

In the end, Job's lack of humility did him in, and how truly happy was he when he died?
Score: 25 Votes (Like | Disagree)

Lounge vibes 05
Sometimes Jobs was the brilliant ideas and marketing man that we all know brought us the Macintosh, iPod, iPhone and iPad.
Other times, he was the absolute idiot who tried to stop third parties from developing for the iPhone, said people would never buy an E reader because people just don’t like reading, tried to call the original iMac the MacMan… and did this
Score: 23 Votes (Like | Disagree)

Jeaz
For disclosure, I work at Dell.

While I'd never use Windows for personal use, and thus a Dell computer, I do like Dell as a company and Michael Dell. He's not the innovator or exotic personality as some of the other "big names in IT", and while I have only met him in passing, he does seem like a nice guy.
Score: 22 Votes (Like | Disagree)

You misunderstand what the quote you posted is trying to say. Michael Dell's personal holdings in Dell is worth $40 billion. He's the 23rd wealthiest person in the world. Just for comparison, Jobs was worth only $10 billion when he died and Cook (though not an entrepreneur) is only worth $1.4 billion.
Score: 16 Votes (Like | Disagree)
Read All Comments