Apple's 96W USB-C power adapter that is designed for use with the 16-inch MacBook Pro currently faces a lengthy 2-3 months shipping estimate on the company's online store in the United States and many other countries. The adapter is also listed as unavailable for in-store pickup at most Apple retail stores around the world. 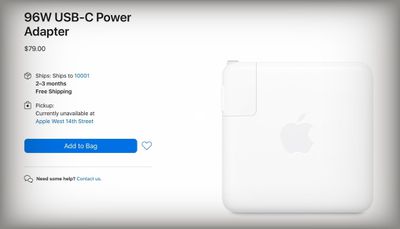 In some countries like Japan, the 2-3 months shipping estimate began showing up in August, and the delay has since extended to more countries.

While redesigned 14-inch and 16-inch MacBook Pro models are rumored to launch later this year, many tech companies are facing supply constraints due to a global chip shortage, so the reason for the 96W power adapter's shipping delay is ultimately unclear.

Apple's smaller 20W, 30W, and 61W power adapters are currently not facing any extended shipping delays in the United States.

A source at an Apple Authorized Reseller informed MacRumors that their distributors currently do not have any stock of the 96W power adapter, suggesting that the power adapter is facing significant supply constraints across multiple channels.

Apple is widely rumored to be planning redesigned 14-inch and 16-inch MacBook Pro models with a faster version of the M1 chip and brighter mini-LED displays. Rumors suggest the notebooks will return to a design with an HDMI port and SD card reader, a magnetic power cable, and physical function keys instead of the Touch Bar.

cmaier
I hope that even if MagSafe makes some sort of return, you can still charge via the USB-C ports.
Score: 25 Votes (Like | Disagree)

Apple will finally squeeze the final 4W to give us the full 100W USB PD.

More likely a substantially more efficient M1X will not need that much wattage, probably the 61W could charge the battery while running the chip full speed if the M1 is any indication.
Score: 8 Votes (Like | Disagree)

h3ysw5nkan
Apple will finally squeeze the final 4W to give us the full 100W USB PD.
Score: 6 Votes (Like | Disagree)

Expecting to be out within 30 days.
Score: 6 Votes (Like | Disagree)
Read All Comments

Tuesday October 19, 2021 1:00 pm PDT by Joe Rossignol
A day after Apple unveiled redesigned 14-inch and 16-inch MacBook Pro models, we continue to learn smaller details about the notebooks that Apple did not mention during its event, and the latest discovery pertains to fast charging. Apple's website indicates that its 67W USB-C power adapter included with the base model 14-inch MacBook Pro is not capable of fast charging any 14-inch MacBook...
Read Full Article • 110 comments

Tuesday October 19, 2021 6:11 am PDT by Joe Rossignol
Apple has confirmed to The Verge that its new 140W USB-C power adapter is the company's first charger based on gallium nitride or "GaN" technology, which allows for smaller, lighter, and more power efficient chargers than silicon-based chargers. Without the use of GaN, the 140W power adapter likely would have been fairly larger given its wattage. Many other brands like Anker and Belkin have...
Read Full Article • 123 comments

Tuesday October 19, 2021 3:38 am PDT by Tim Hardwick
With the debut of the new 14-inch and 16-inch MacBook Pro models, Apple has brought a fast charge capability to the Mac for the first time, allowing users to charge the laptop battery up to 50% in just 30 minutes. But there's a difference between models with this feature that Apple didn't really mention. While both models can be charged over Thunderbolt or MagSafe, only the 14-inch MacBook...
Read Full Article • 107 comments

Forgot to Pre-Order Your MacBook Pro? Apple Store Pickup Is Now An Option

Tuesday October 26, 2021 12:11 am PDT by Tim Hardwick
Pre-orders for Apple's new 14-inch and 16-inch MacBook Pro models opened last Monday immediately after Apple's "Unleashed" event, and soon after, shipping estimates for all configurations began slipping by weeks and in some cases by over a month. If you weren't able to pre-order after Apple's event for whatever reason, there's still a chance to get a 14-inch or 16-inch MacBook Pro when they ...
Read Full Article • 103 comments

Monday August 2, 2021 3:02 am PDT by Hartley Charlton
Apple will reportedly offer a new 25W power adapter alongside the iPhone 13 lineup, less than one year after the iPhone 12 controversially debuted with no power adapter in the box, according to a recent report. A rumor originating from China has suggested that Apple's upcoming iPhone 13 models will support 25W fast charging. The iPhone 12 models only support fast charging up to 20W...
Read Full Article