The Surface Laptop Studio is Microsoft's "most powerful Surface" to date, and it replaces the Surface Book line of laptops. Rather than a removable display like prior models, Microsoft has adopted a design that looks rather similar to Apple's Magic Keyboard. The 14.4-inch display lifts up and can be pulled forward into a tablet mode. 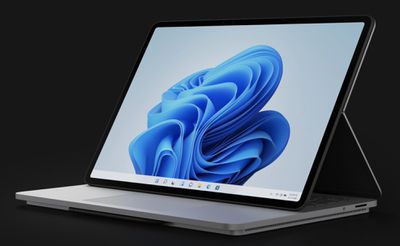 There are actually a total of three modes: laptop, stage, and studio. Laptop looks like a standard laptop computer, while stage is a middle tier mode that allows the display to be pulled forward at an angle for gaming and watching movies, and studio, which is a full tablet mode with the display folded all the way down.

Inside, there's an 11th-generation Intel Core i5 or Core i7 processor and either Intel Iris Xe graphics or an Nvidia RTX 3050 Ti graphics card. It supports 16 to 32GB RAM and up to 2TB of storage, plus 120Hz refresh rates, and it works with the new Surface Slim Pen 2. Pricing starts at $1,600.

Microsoft's other big announcement was the Surface Duo 2, an updated version of the Surface Duo foldable smartphone. The new model, which is slightly larger at 8.3 inches unfolded, adds 5G connectivity to bring it in line with competing smartphones, and it now includes a rear camera system with wide, ultra wide, and telephoto lenses.

The Surface Duo 2 is equipped with Qualcomm's fastest Snapdragon 888 chip, and it continues to feature the same design as the prior model with a prominent hinge that's not hidden under the display. Pricing on the Surface Duo 2 starts at $1,499.

More on Microsoft's announcements can be found on the Microsoft website, and many of the devices can be ordered starting today.

DHagan4755
It's almost as if Microsoft wondered, "How can we make this look like a combination of a MacBook Pro & iPad Pro with Magic Keyboard?" And then another engineer walked in & asked, "Can we make it kinda retro chunky, like a 90s Dell?" And the lead Microsoft designer said, "Hold my beer."
Score: 33 Votes (Like | Disagree)

If you get a Surface Studio laptop, just don't even remotely spill anything onto the work surface or allow a drink to condensate in its glass next to it - why? Because it'll go right into the vents at the bottom. I don't know this was a good design decision?

how is that any different then the vents on a macbook along the bottom
Score: 26 Votes (Like | Disagree)

brandonnnnnnn
I am not sure why, but I have always been interested in the Surface Duo. Should I get the Surface Duo 2 and return my 13 Pro Max?
Score: 19 Votes (Like | Disagree)

I love my Surface Pro and Surface Laptops at work, by my oh my, the Surface Studio looks awful with that bucket on the bottom.

I suppose if they made it the same size of the top part we'd have to call it the Surface Chunky Boi.

Not as chunky as you think

Serban55
First, they admitted after years the surface book was a bad design, ok
Now they have a laptop with a pad underneath it to cool the cpu and gpu? looking at those vents im thinking Microsoft would love the M1 or upcoming next M chip
Score: 13 Votes (Like | Disagree)

It's a good thing Apple mainstreamed all this great features for Microsoft to steal.

you mean like how the iPad Pro copied the Surface Pro design.