Just a day after the iPhone 13 models were announced by Apple, the first Geekbench score has already surfaced. Someone has benchmarked the GPU performance of the iPhone 13 Pro, and there's a significant performance increase compared to the prior-generation iPhone 12 Pro. 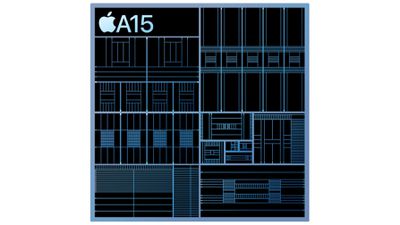 Apple has called the A15 chip with the 5-core GPU in the Pro models the "world's fastest smartphone chip," and says that it delivers "up to 50% faster graphics performance than any other smartphone chip." Given the difference demonstrated in Metal scores, that appears to be accurate, with the A15 in the Pro models outperforming the A14. The benchmark also confirms that the Pro models feature 6GB RAM as was already seen in Xcode. The ‌iPhone 13‌ and 13 mini have 4GB RAM.

No one has benchmarked one of the standard ‌iPhone 13‌ models so we don't know how they compare to the prior-generation A14, nor do we have a benchmark of the CPU to compare CPU performance between the A14 and A15. Apple has said little about the A15's CPU, and rather than comparing it to the A14, Apple instead pointed out that it's "up to 50% faster" than the competition.

The iPad mini has the same A15 chip with 5-core GPU that's in the ‌iPhone 13 Pro‌ models, so we can expect the same graphics performance from Apple's updated tablet.

With the ‌iPhone 13‌ lineup set to launch next week and soon to be in the hands of reviewers, we won't have to wait too much longer to get additional benchmarks of the A15 that will give us more insight into its overall performance. The new iPhones are set to be available for pre-order on Friday, September 17 at 5:00 a.m. Pacific Time.

Bluetoot-
Okay but what are we going to do with it?
Score: 38 Votes (Like | Disagree)

Okay but what are we going to do with it?

scan all your activities for csam
Score: 38 Votes (Like | Disagree)

Okay but what are we going to do with it?

martin2345uk
By the time we get to the iPhone 18 it’s gonna be so fast it’ll react to your presses before you make them
Score: 16 Votes (Like | Disagree)

Craiger
Who would upload a GPU benchmark and not a CPU benchmark if not Apple?
Score: 13 Votes (Like | Disagree)

aeternitas
Does anyone even care already?
Score: 13 Votes (Like | Disagree)
Read All Comments