Apple today announced that the iPhone 13 mini, iPhone 13, iPhone 13 Pro, and iPhone 13 Pro Max will all be available to pre-order this Friday, September 17 at 5 a.m. Pacific Time, and all four devices will launch one week later on Friday, September 24. These dates apply to customers in the United States, Australia, Canada, China, Germany, India, Japan, the UK, and more than 30 other countries and regions. 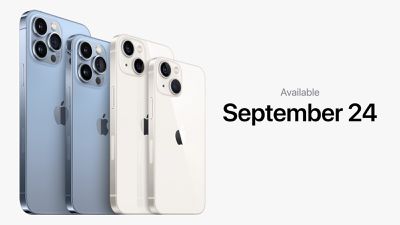 All of the iPhone 13 models will subsequently be available in Turkey on Friday, October 1, followed by Malaysia, Mexico, South Korea, Thailand, and select other countries and regions beginning Friday, October 8, according to Apple.

Key features across the iPhone 13 lineup include a faster A15 Bionic chip, camera improvements, longer battery life, and a smaller notch. The two Pro models also feature a ProMotion display with a variable refresh rate up to 120Hz.

CHSE
Buying a new iPhone has become about as exciting as buying a new pair of socks ... there is just nothing new about them any more.
Score: 17 Votes (Like | Disagree)

hard pass. It's an apple product.

Buying a new iPhone has become about as exciting as buying a new pair of socks ... there is just nothing new about them any more.

Completely agree... There is hardly any innovation anymore. Just things that the competition had for years... And the notch is still there WTF
Score: 9 Votes (Like | Disagree)

jmacr
I was mostly disappointed at the presentation. The best upgrade/improvement came to the iPad mini. Why not give the iPhone the fingerprint upgrade on the power button? And I think I got too excited about the rumours on Apple Watch. Wasn't nearly as exciting. Ill be upgrading my phone, but might have to wait on the watch.
Score: 5 Votes (Like | Disagree)

WRXHokie
I'll be pre ordering. Coming back from Android.
Score: 5 Votes (Like | Disagree)

dogslobber
My 6s still has a headphone jack.
Score: 4 Votes (Like | Disagree)
Read All Comments

Sunday September 19, 2021 10:55 am PDT by Juli Clover
Apple has started shipping out iPhone 13, iPhone 13 mini, iPhone 13 Pro, and iPhone 13 Pro Max orders to customers who pre-ordered one of the new devices on Friday, September 17. Many orders will still say "Preparing to Ship" in Apple's ordering system and will continue to do so until later this week, but customers in the United States who are receiving their devices through UPS can use the U...
Read Full Article • 122 comments

Wednesday March 9, 2022 11:46 pm PST by Sami Fathi
A new video posted to Twitter has offered a first hands-on look at Apple's new green iPhone 13 and the Alpine Green iPhone 13 Pro color options announced earlier this week. Following a tradition it started in 2021, Apple this week introduced new iPhone colors for the spring. The company unveiled only a new purple color for the iPhone 12 last year, but this year introduced two colors for the...
Read Full Article • 93 comments