Twitter today announced the official launch of Super Follows, a new feature that allows creators to provide subscriber-only content that requires a paid fee to access. 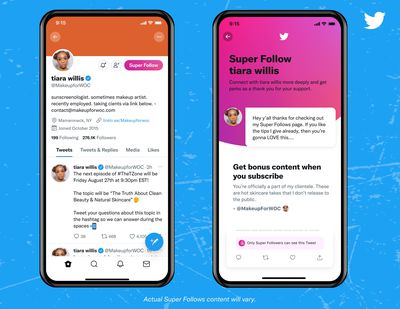 First introduced in February, Super Follow is another method that Twitter is using to monetize tweets and provide content creators with a way to earn money on the platform.

Creators who use the Super Follow feature on Twitter can charge $2.99, $4.99, or $9.99 per month to allow their subscribers to access exclusive tweet content. According to Twitter, creators are eligible to keep up to 97 percent of revenue until a $50,000 threshold is reached, and after that, creators will earn up to 80 percent of revenue after in-app purchase fees.

Twitter says that Super Follows are designed for anyone that brings "unique perspectives and personalities" to Twitter to drive public conversation.

At the current time, Super Follows are available to a small group of U.S. content creators that applied to participate, but people can apply to join the waitlist to set up a Super Follows subscription. 10,000 or more Twitter follows are required.

Those interested in subscribing to an account that offers Super Follows can tap on the Super Follow button on an account's profile to see pricing details. Super Follow is limited to the U.S. and Canada at the current time, but it will be rolling out globally on iOS in the next few weeks.

ricktat
And they are thinking this isn't for PR0n>?
Score: 25 Votes (Like | Disagree)

Stromos
People really think they are important enough to receive money on their one sentence thoughts/opinions?

Sounds a bit OnlyFans-ish to me ?‍♂️
Score: 21 Votes (Like | Disagree)

raindogg
You couldn't pay me $5 an hour to use twitter.
Score: 20 Votes (Like | Disagree)
Read All Comments

Thursday September 2, 2021 4:59 am PDT by Hartley Charlton
Each Twitter Super Follow subscription is an individual in-app purchase for every account with the feature set up, it has emerged. Screenshot from Jane Manchun Wong showing Twitter's in-app purchases on its App Store page. The unusual system, spotted by Jane Manchun Wong, means that for every Super Follow there is an individual in-app purchase for that account specifically. Some observers are ...
Read Full Article • 41 comments

Friday February 26, 2021 4:07 am PST by Tim Hardwick
In an attempt to reduce its dependence on advertising to generate revenue, Twitter has announced two new features coming to the social media platform later this year, including a "Super Follow" feature that will let users charge followers for access to exclusive content. According to Twitter, the additional content could include things like bonus tweets, access to a community group, video,...
Read Full Article • 68 comments

Wednesday January 19, 2022 10:59 am PST by Juli Clover
Instagram today began rolling out subscription options that are designed to allow Instagram users to pay for exclusive Instagram Live videos and Stories from their preferred creators. As noted by TechCrunch, Instagram is testing the subscription feature with a selection of 10 U.S. creators, each of whom can choose their subscription price. Subscription pricing ranges from $0.99 per month to...
Read Full Article • 61 comments

Tuesday March 9, 2021 7:31 am PST by Sami Fathi
Last month, Twitter announced "Super Follow," a new business model that will allow creators to charge users for exclusive content on the platform. To make it work, Twitter will enable users to pay creators, influencers, and others a set monthly price to become a "Super Follower" via an in-app purchase on iOS and Android. Apple's in-app purchasing system, which gives the tech giant a 30%...
Read Full Article • 38 comments