Two of Apple's self-driving cars operating in manual mode were involved in minor collisions in August, according to the California DMV. 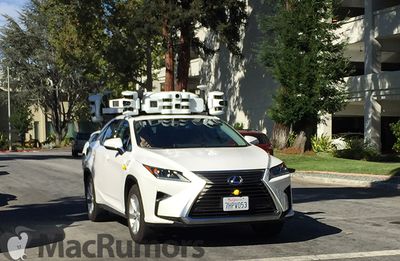 The first incident [PDF] occurred in San Diego, California in the Hillcrest area on August 19. The Lexus RX 450h was stopped in traffic and was hit by a Hyundai. The accident was described as minor with no injuries.

The second accident [PDF] occurred on August 23 in Cupertino, California, right near the Apple Park campus. The vehicle with Apple's self-driving equipment was in manual mode and it was stopped in traffic when it was rear ended by a Subaru Outback.

Both of these incidents were not the fault of the self-driving vehicle or the person operating the vehicle, and are largely not notable. What is interesting, though, is that Apple vehicles were involved in two collisions in the same month after no accidents since September 2019.

Earlier this year, the California DMV's disengagement and mileage reports suggested that Apple's Lexus SUVs with self-driving software traversed more than 18,000 miles in 2020, a steep increase compared to prior years. It's possible that Apple has ramped up its testing in 2021, leading to a higher number of incidents.

Apple has been testing its self-driving software since early 2017, using the aforementioned Lexus RX 450h vehicles outfitted with sensors and cameras. The work on autonomous driving is part of Apple's longtime car project, and rumors suggest Apple is planning to release a vehicle in the mid to late 2020s.

aka this is nothing but a clickbait headline.
Score: 95 Votes (Like | Disagree)

zakarhino
"operating in manual mode" aka someone was driving it, it was not self driving

Maybe you should highlight that part in the article's headline.
Score: 40 Votes (Like | Disagree)

I7guy
The collisions were not "at fault" of the operator. Maybe headline should reflect that.
Score: 20 Votes (Like | Disagree)

840quadra
Clearly not immune to getting hit by other cars when stopped stationary in Manual mode. Would the car have vertical take-off in Automated mode to avoid these crashes?
Score: 18 Votes (Like | Disagree)

markfc
What an awful story!
Score: 16 Votes (Like | Disagree)
Read All Comments

Tuesday August 3, 2021 8:39 am PDT by Hartley Charlton
Apple's fleet of self-driving vehicles roaming the streets of California for testing now includes 69 vehicles and 92 drivers, according to information from the California Department of Motor Vehicles obtained by macReports. This means that Apple has added one self-driving car and 16 drivers since May this year. Apple has been expanding its autonomous vehicle test since it was granted a permit...
Read Full Article • 55 comments

Tuesday January 25, 2022 6:46 am PST by Sami Fathi
Telsa car owners who have auto insurance through the electric vehicle company are now able to link their Tesla insurance cards directly to Apple Wallet, providing more accessible access to the cards on the iPhone and Apple Watch. Image from @coffeetabletsla via Tesla North As part of an update to the Tesla app yesterday on the App Store, the company has introduced support for Apple Wallet...
Read Full Article • 88 comments

Tuesday October 12, 2021 10:52 am PDT by Juli Clover
One of Apple's self-driving test vehicles was involved in a minor incident on September 27, according to a filing made with the California DMV [PDF]. The self-driving vehicle, which was operating in autonomous mode at the time, clipped a curb while going 13 miles per hour. There was no damage reported, but the car did require a realignment.A test vehicle, operating in autonomous mode in...
Read Full Article • 86 comments