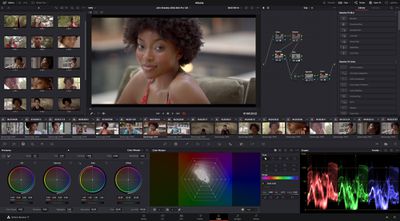 Thanks to the completely reworked engine, DaVinci Resolve 17.3 can work up to 3 times faster on Apple Mac models with the M1 chip, according to the company. The speed increase should make playback, editing, and grading of 4K and 8K projects faster using the software.

The new processing engine also uses tile based rendering, which can give users on notebooks up to 30% longer battery when working in DaVinci Resolve.

In addition, version 17.3 supports a new option on Mac computers with ‌M1‌ for H.265 hardware encoding. It's now possible to prioritize speed or quality when rendering, with render times potentially improved by up to 65%. DaVinci Resolve now also decodes AVC Intra files using the media engine built into the Apple ‌M1‌ chip, making decoding and playback faster when working with these file formats.

Meanwhile, new FX controls have been added, including new grid shapes and greater precision when using mosaic blur, allowing users to finely adjust the amount and appearance of pixellation.

Elsewhere, new drivers offer improved latency, and more Fairlight export options make it easier and faster to pass on audio for further processing or inclusion in a larger project.

"This is truly an amazing update that gives customers huge performance and power efficiency gains on Mac models with M1, and it totally transforms your computer, simply by downloading this free of charge DaVinci Resolve software update" said Blackmagic Design CEO Grant Petty in a press release. "This speed increase is stunning and it's hard to believe. I have not seen a speed improvement this large since the original 68000 to Power PC transition back in the 1990s and it is just amazing. Who would have thought just a year ago that multiple 4K streams could be played back and edited natively on a MacBook Air, but it's easy now on DaVinci Resolve with M1. The engineering team has worked so hard on this new image processing engine for DaVinci Resolve, and it is an incredibly exciting time to be developing software for the Mac!"

Pangalactic
My favourite editing software on the market
Score: 11 Votes (Like | Disagree)

leman
And that, my friends, is exactly the reason why Apple went with their proprietary GPU hardware and APIs instead of backing third-party hardware and Vulkan.
Score: 9 Votes (Like | Disagree)

Kaptajn Haddock
And that is with the consumer M1 chip. Just wait until Apple unleash their pro models with what ever their M1 pro chip will be called.
Score: 7 Votes (Like | Disagree)

Apple Knowledge Navigator
And this is on M1! Just imagine what's in store for future M-chips...
Score: 6 Votes (Like | Disagree)

Because some fanboys believe that the M1 is better in performance than anything else. But that is not true. Some fanboys also confuse hardware encoders with software encoders and then come to the wrong conclusions.

I have an M1 myself and I am a Mauser.

People are genuinely impressed by an entry level machine that punches above its weight and are excited for the higher level stuff.

It’s old. It’s tired. It’s honestly irrelevant. Nobody outside your strawman thinks an M1 is going to out muscle a dedicated high end gpu and a high end cpu with double the threads.

Furthermore it’s not even relevant to this thread. Which is about DaVinci Resolve gaining performance on the M1.

Tuesday March 8, 2022 1:46 pm PST by Juli Clover
The newly announced M1 Ultra is now Apple's fastest Apple silicon chip, unseating the M1 Max as the top-of-the-line option. With the power of the updated chip, the new Mac Studio is able to outperform not only the high-end prior-generation 27-inch iMac, but also the top-of-the-line 28-core Mac Pro. The M1 Ultra chip offers a 20-core CPU with 16 high-performance cores and 4 high-efficiency...
Read Full Article • 158 comments

Monday June 27, 2022 1:57 pm PDT by Juli Clover
Benchmark testing has indicated that the 256GB variant of the 13-inch MacBook Pro with M2 chip offers slower SSD performance than its M1 equivalent, and now real-world stress testing by YouTuber Max Yuryev of Max Tech suggests that the 256GB SSD in the 13-inch MacBook Pro is also underperforming in day-to day-usage. The M2 MacBook Pro with 256GB SSD and 8GB RAM was slower than the M1 MacBook ...
Read Full Article • 337 comments