Samsung today unveiled a series of new products at a virtual event, including the Galaxy Z Fold 3 and Galaxy Z Flip 3 foldable smartphones, Galaxy Buds 2 wireless earbuds, and Galaxy Watch 4 smartwatch. We've provided a high-level summary of the new products below for Apple users who are interested in learning about the latest competition. 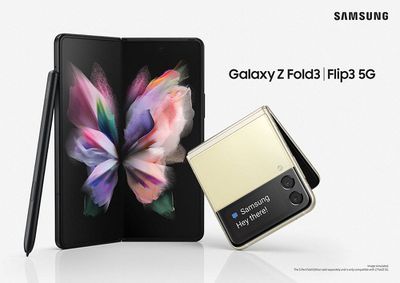 A key new feature of the Fold 3 is an uninterrupted 7.6-inch inner display with a 4-megapixel camera embedded under the screen, whereas the Fold 2 had a hole-punch camera. This is in addition to a trio of 12-megapixel rear lenses and a 10-megapixel front camera. The outer 6.2-inch display on the Fold 3 now supports up to a 120Hz refresh rate for smoother content, whereas only the inner display was 120Hz capable on the Fold 2.


The Fold 3 is Samsung's first foldable smartphone with support for the S Pen, which comes in two options specifically for the device: S Pen Fold Edition and S Pen Pro. Samsung says both styluses feature a specially engineered retractable tip with "force limit technology" to protect the Fold 3's inner display from scratches and damage.

Powered by Qualcomm's Snapdragon 888, the Fold 3 runs Android 11 and is equipped with a 4,400 mAh battery, 256GB or 512GB of storage, and 12GB of RAM. The device is available in three colors: Phantom Black, Phantom Green, and Phantom Silver.

The smaller and less expensive Flip 3 sports a 6.7-inch inner display that now supports 120Hz, and an expanded 1.9-inch outer display. The device is also powered by Qualcomm's Snapdragon 888 and is equipped with a 3,300 mAh battery, 128GB or 256GB of storage, 8GB of RAM, dual 12-megapixel rear cameras, a 10-megapixel front camera, and more.


The Fold 3 and Flip 3 start at $1,799.99 and $999.99 respectively. Both devices are available for pre-order starting today, and they will launch on August 27 starting with select markets, including the United States, Europe, and Korea.

Apple is rumored to be working on a foldable iPhone, with analyst Ming-Chi Kuo expecting the device to launch in 2023 with an 8-inch display.

The key attraction of Samsung's new Galaxy Buds 2 is active noise cancellation for just $149.99, making them much lower priced than the AirPods Pro, which retail for $249 but are frequently on sale for less at some retailers.

Samsung said Galaxy Buds 2 offer up to five hours of battery life with active noise cancellation enabled, and like the AirPods Pro, they are recharged in a wireless case. Galaxy Buds 2 are the lightest and smallest Galaxy Buds earbuds to date and they will be available in four colors: Graphite, White, Olive, and Lavender.

Last up is the Galaxy Watch 4 and Galaxy Watch 4 Classic, powered by a new version of Wear OS that was jointly developed by Google and Samsung. In many ways, this feels like the best shot at an Android-based competitor to the Apple Watch, with the new user interface seemingly drawing some inspiration from watchOS's honeycomb grid view for apps.

Tech specs for both Galaxy Watch 4 models include an Exynos W920 processor, 16GB of internal storage, 1.5GB of RAM, up to 40 hours of battery life, IP68-rated water and dust resistance, Bluetooth 5.0, and more.

TheYayAreaLiving ?
Can't hate on Samsung. Very impressed with Samsung. The 2021 Samsung line up looks great. Ahead of the game. Good job Samsung! Competition is great. Especially nowadays. Hopefully, Apple will be able to deliver some innovation.

Lounge vibes 05
I think I’m gonna get these, that way Apple can’t scan any of my photos. Samsung and Google would never
/S
Score: 27 Votes (Like | Disagree)

dugbug
I just don't get the desire for these phones.
Score: 25 Votes (Like | Disagree)

jk1221
Yeh, I just don't get the yawns. If you are yawning then you're an Apple fanboy and gobble anything up with fruit logo on it; and not really a "tech fan" as a general category.

This is impressive tech no matter what company released it. Folding and an under-display camera in the mass market. Has basically every spec; even those the iPhone still doesn't.

And why do it? Because if no one does it we never move forward with tech. Somoene has to leap first.
Score: 23 Votes (Like | Disagree)

Do they spy on your locally stored photos? I know Samsung loves to copy Apple.

We would still be at 4 inch iPhones if not for Samsung. People literally laughed at the Note being ridiculous in the past; and not all that long ago either.

It goes both ways.

When Apple does under-display cameras in a few years too it will be #courage.
Score: 21 Votes (Like | Disagree)

I think I’m gonna get these, that way Apple can’t scan any of my photos. Samsung and Google would never
/S

When you don't understand the difference between promising an ecosystem based on privacy as a "fundamental human right" and then going back on it versus never promising any privacy.... HUGE HUGE difference

No one is moving over because of this; it doesn't make it right either.

Fold 3 outer screen is still way too narrow and this thing still can't be used with confidence at a beach.

How ever did we function before we could have our phones out at the beach.....
Score: 19 Votes (Like | Disagree)
Read All Comments