Panic, a company known for its range of apps designed for Apple's iPhones, iPads, and Macs, today announced the launch of pre-orders for its Playdate handheld gaming system. 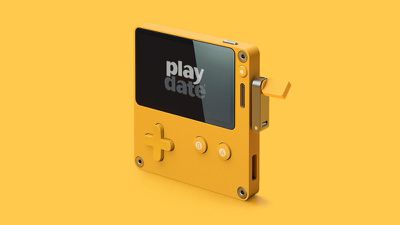 Panic had 20,000 Playdate systems available for preorder for shipping in late 2021, but those quickly sold out and orders placed now will ship out in 2022.

Priced at $179, the Playdate is a pocket-sized gaming system that has a unique design. It features a black and white display, bright yellow chassis, a d-pad, A+B buttons, and a crank on the side that serves as a flip-out rotational controller.

There will be several games available at launch, and an additional game will be delivered each week for a few months. The Playdate comes equipped with Wi-Fi, Bluetooth, a USB-C port for charging, and a headphone jack.

nosnhojm
I don't understand all the hate for this (not just here, but other comments/forums). This device is not meant to compete with the switch or stream deck. For me this is a nostalgia machine that puts a modern spin on the original game boy (which I grew up with). The debate on pricing I understand, but not whether it should exist.
Score: 33 Votes (Like | Disagree)

iapplelove
Because the world is screaming for a portable gaming system with pre installed games and a black and white screen.
Score: 33 Votes (Like | Disagree)

Internet Enzyme
Lots of cynicism here, but I think it’s a breath of fresh air. Playdate was never positioned and should not be considered as a new entrant in the competitive handheld console market: rather, it is a nifty, kind of charismatic curiosity that promises 24 free games.

Good graphics and gameplay don’t strictly come in the form of expensive 3D games replete with modern rendering embellishments and cutting-edge technical implementations: instead, what the Playdate is posing is a more halcyon, minimalist view of gaming, one that understandably appears kind of alien to people who are ensconced within their own, limited, predefined concept of the medium. I feel like people have a narrow view of what gaming can be in the modern day, and have forgotten that the medium of gaming is, well, simply a medium, and that it can be wider than just console wars and PC gaming. And I don’t think anyone, including Panic, expects Playdate to be at all competitive in that market.

Perhaps it is a bit of a hipster product, but the price is not bad at all given the quality of the design and the number of free exclusive games it will get. Looking forward to receiving my pre-order later this year.
Score: 29 Votes (Like | Disagree)

Yeah that's an immediate buy from me.

Once the dev tools are out in the wild the homebrew community for this should be interesting.

The hater parade on this is just fascinating. What a bunch of joykills.

Yes a bunch of creators we admire teamed up to make something cool and amazing. It's a little expensive because it turns out that making custom hardware is expensive. "It's not gonna compete with the Switch" no **** sherlock, they're only making twenty thousand this year.

YOU DON'T HAVE TO LIKE IT, IT'S NOT FOR YOU.

macsplusmacs
After the Steam Deck has been shown (and ordered by myself), there is NO interest in this from me. This is just a gimmick. (a too highly priced gimmick)

Feel free to differ in opinion of course.
Score: 26 Votes (Like | Disagree)
Read All Comments

Feral's 'Alien: Isolation' for iPhone and iPad 'One of the Best iOS Conversions Ever'

Friday December 17, 2021 2:00 am PST by Tim Hardwick
Feral Interactive has released its much-anticipated port of Alien: Isolation for iPhone and iPad, which MacRumors sister site TouchArcade is calling "one of the best iOS conversions ever." Launched in 2014 on PS4, Xbox, PC, and more, the first-person action adventure game was lauded for its emphasis on stealth and survival horror in the player's confrontation with a single alien, as well as...
Read Full Article • 142 comments

Thursday September 16, 2021 3:56 am PDT by Tim Hardwick
Update: As of 5:30 a.m. Pacific Time, the "Expired Pre-Order" issue appears to have been fixed for many Apple customers. Some Apple customers who went through the pre-approval steps to purchase a new iPhone 13 on Apple's website or Apple Store app are seeing the message "Your iPhone pre-order has expired" when subsequently checking their order status page. Apple customers can use the...
Read Full Article • 92 comments