Apple today announced that two new games "Tetris Beat" and "Monster Hunter Stories" will be coming soon to Apple Arcade, while "Skate City" will be receiving a major update with a new Olympics-inspired Tokyo level later this week. 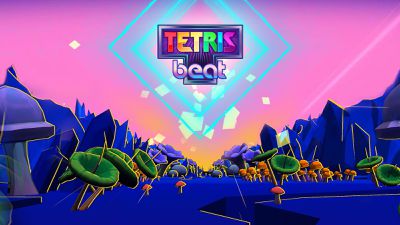 "Tetris Beat" will combine classic Tetris block-stacking gameplay with new music and innovative rhythm mechanics. The game tasks players with rotating and dropping Tetriminos to the beat, keeping to the rhythm to build their biggest combo chain and score big. For hardcore Tetris fans looking for the traditional gameplay experience, they can try out the Marathon mode, where they can also choose the soundtrack.

"Monster Hunter Stories" is a roleplaying game where players enter a world filled with large monsters that roam the land, and people everywhere make a living hunting them. However, there's a remote village that follows a different set of customs called the Monster Riders, who don't hunt but instead form bonds with monsters. Players can become Riders to befriend countless Monsties and embark on new adventures.

Last, Apple Arcade game "Skate City" is receiving its biggest update ever on July 23 with a new Tokyo level, just in time for the postponed 2020 Summer Olympics. The game hails from Snowman, makers of "Alto's Adventure" and "Alto's Odyssey."


Snowman says players will be able to skate through a diverse range of neighborhoods and famous skate spots to experience Tokyo's unique identity. Tokyo will include over 60 challenges in Free Skate and Challenge modes, along with new deck designs, updated clothes in the skate shop, and new original songs that expand on the popular soundtrack.

"Skateboarding's coming to the Olympics for the first time in history, which is a triumphant moment for the sport," said Ryan Cash, co-founder of Snowman. "We knew we had to be part of it in some small way."

Priced at $4.99 per month or $49.99 per year, Apple Arcade provides access to a catalog of around 200 games without ads or in-app purchases across the iPhone, iPad, Mac, and Apple TV, with additional titles added periodically. Other recently updated games part of the service include "Agent Intercept" and "Game of Thrones: Tale of Crows."

groove-agent
We just subscribed to AA for the 3 month free trial. Haven't found a single game that looks good. They all seem to be little "kiddie" games that you might play while you're waiting for your bus because there's nothing better to do.

Apple, time for some AAA titles. Work your magic.
Score: 3 Votes (Like | Disagree)

daved2424
Coming next to Apple Arcade: Pong HD! Enjoy the classic game of Pong in all its HD glory. Just £4.99 to continue paying for all these new and exciting titles!
Score: 3 Votes (Like | Disagree)

4jasontv
I love Monster Hunter, but the description of Monster Hunter Stories is a bit misleading. While it's true most people kill monsters your village prefers to enslave them. The basic premise is if you are there when the egg hatches they will imprint on you instead of their biological mother. Then you take this baby who doesn't know better and you ride them from battle to battle. It's sort of like Pokemon except they carry you.
Score: 3 Votes (Like | Disagree)

decypher44
I have 12 months free AA. I’ve really only played one game. Not too interested in those I’ve seen. It seems difficult to locate games, unless there are so few that what I see is what I get.

I’ve had a hard time finding a golf game (not the gimmicky one they have). A golf game with real physics, courses, etc. Is there one that I’m not seeing?

And to stay on topic - I’ll give the Tetris game a try.
Score: 2 Votes (Like | Disagree)

Saturn1995
I still wonder how finically successful AA is.? Devs don't seem to be flocking to it, my guess is free to play games are so much more lucrative. I was hoping it would be a home for more straight-up single player experiences, like old-school narrative based games, but instead it seems to be a combo of just a few better than average ios games and a lot of meh. I dunno, if this came out years ago it might but cool, but there's just so much competition out there already it's hard to justify this kind of subscription.
Score: 2 Votes (Like | Disagree)

breather
I would love to get remastered versions of Fieldrunners 1 and 2 for Apple Arcade.
Best TD games ever!
Score: 2 Votes (Like | Disagree)
Read All Comments