Twitter users will soon be able to change who can reply to their tweets after they've posted them, the company has announced. 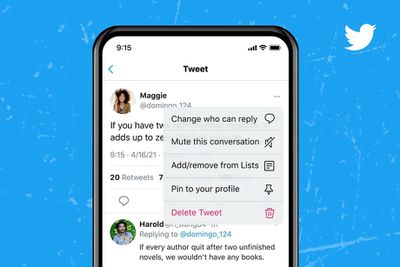 Limiting who could reply to a tweet was already an option, thanks to a feature rolled out last year, but users had to choose who could reply before posting the tweet. Now they can make that decision after the post has gone live.

Changing the reply options on a posted tweet is simple enough. Tap the ellipsis (thee dots) menu in the top-right corner of a tweet and select "Change who can reply" from the dropdown.

A "Who can reply?" Card will appear, from which you can choose one of the three same options that are available when composing a tweet: "Everyone," "People you follow," and "Only people you mention."

Your Tweets = Your space. Now you can change who can reply to you even after you Tweet. https://t.co/rNWJk6zWTr pic.twitter.com/3HFSjAotg7 — Twitter Safety (@TwitterSafety) July 13, 2021

The new option gives users more control over who can interact with their posts, which aims to reduce harassment on the social media platform, although it's not hard to see how it could have the unintended effect of restricting constructive debate and amplifying someone's online "echo chamber." The feature is currently rolling out worldwide on iOS, Android, and the web.

Twitter has recently been previewing a lot more feature ideas before it commits to bringing them to the platform so that it can garner feedback on them. For example, earlier this month it said it was considering letting users post select tweets for "Trusted Friends" only, an idea similar to Instagram's "Close Friends" feature, which lets users share personal Stories more privately.

Minxy
What happens to a reply that's up but doesn't fall under the new allowed group category.
This isn't the solution to harassment, it really is just going to make Twitter a worst haven for people who want to surround themselves with the same opinion. Echo chamber indeed.
Score: 12 Votes (Like | Disagree)

What happens to a reply that's up but doesn't fall under the new allowed group category.
This isn't the solution to harassment, it really is just going to make Twitter a worst haven for people who want to surround themselves with the same opinion. Echo chamber indeed.

Basically a great way of controlling a narrative.
Score: 9 Votes (Like | Disagree)

happygodavid
After all the misinformation, disinformation, conspiracy theories, and vitriol I've seen on Twitter, especially in the last year, I really hope this feature doesn't come to fruition. People, especially malicious ones, need to be fact-checked on their public proclamations of "truth." "Giving control" to users is a misnomer; all this does is silence reason and critique, further dividing people into tribalism and self-indulgent confirmation bias.
Score: 4 Votes (Like | Disagree)

And yet still no edit button after a tweet has been posted.

An edit button is completely impractical. If you have made a mistake, then you should delete and retweet. Picture the following scenario with an edit button:

I tweet "Like and retweet this picture of a cat for good luck" or something as mundane as that. I then edit that tweet a few weeks later to say "Like and retweet this picture...." and I have edited the tweet to show animal torture or changed the message to be that you support pedophilia. You could then have hundreds of thousands of people who had posted that on their own timeline, and possibly don't know about it as it's weeks later.

The only way an edit button would work is if a tweet is edited, it then removes all comments or likes up until that point, as the person who liked or commented on the post did so based on it's original content. At this point, you would have been as well deleting the original tweet and tweeting it correctly.

There is an argument that Facebook allows an edit function, and a edit history. This differs from Twitter though where I can see all the posts a user has liked or retweeted. Many employers check social media of job applicants, it is completely unreasonable to expected everyone to have to continually check their previous likes and retweets incase someone has decided to edit them.
Score: 4 Votes (Like | Disagree)

nikaru
I would rather prefer having a soccer team kicking me between the legs, than entering again in Twitter.
Score: 3 Votes (Like | Disagree)

Cleartz
And yet still no edit button after a tweet has been posted.
Score: 2 Votes (Like | Disagree)
Read All Comments

Tweetbot Updated With New 'Behaviors' Menu on iPhone and iPad

Monday August 30, 2021 7:13 am PDT by Joe Rossignol
Tapbots today released version 6.3 of Tweetbot for the iPhone and iPad, with the key new feature being a "Behaviors" menu in the app's settings that contains several toggle switches for fine tuning your Tweetbot experience. For example, while tapping the status bar in the Tweetbot app will bring you to the top of your timeline by default, users who dislike this feature can now turn it off...
Read Full Article • 20 comments

Safari Team Asks for Feedback Amid Accusations That 'Safari Is the Worst, It's the New IE'

Wednesday February 9, 2022 7:16 am PST by Hartley Charlton
Apple's Safari and WebKit team has asked for feedback on Twitter amid criticisms of the browser's bugs and missing support. Jen Simmons, an Apple Evangelist and developer advocate on the Web Developer Experience team for Safari and WebKit, Tweeted that "Everyone in my mentions [is] saying Safari is the worst, it's the new IE." This led her to ask users for feedback, preferably highlighting...
Read Full Article • 575 comments