Qualcomm Chief Executive Cristiano Amon believes that Qualcomm will provide laptop chips that can compete with Apple silicon by next year and has explained how the company views Apple's expected transition to its own custom modems. 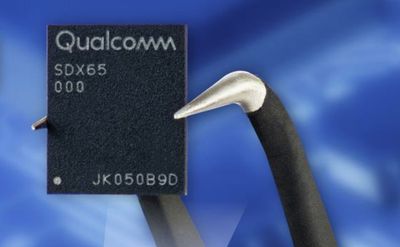 Speaking to Reuters, Amon said that Qualcomm is capable of having the best chip on the market, thanks to a team of chip architects who previously worked for Apple but have since come to Qualcomm.

Earlier this year, Qualcomm acquired the chip startup company Nuvia for $1.4 billion, which was founded by a number of Apple chip designers. Qualcomm will begin selling custom silicon Nuvia-based laptop chips in 2022, which are expected to boast impressive power consumption for extended battery life.

Instead of using core designs licensed from Arm, Qualcomm is looking to use a completely custom core design for its chips, like Apple, to rival Apple silicon. Should Arm develop a better CPU than Qualcomm, Amon said that the company will seek to license the better architecture directly from Arm to ensure that its chips are industry-leading.

Apple is currently a major customer of Qualcomm, with the Qualcomm modem chips being used in all iPhone 12 models. It has been widely reported that Apple is in the process of developing its own custom in-house modem to displace Qualcomm's component, with the first Apple modems appearing in new iPhone models as soon as 2023.

Amon addressed the threat posed by Apple developing its own in-house modems, meaning that Qualcomm would lose Apple as a customer. Most immediately, Amon explained that Qualcomm has decades of experience designing modem chips, which would make it difficult for any rival to replicate its technology.

He added that "the Huawei addressable market is as big as the Apple opportunity is for us," suggesting that Qualcomm may be able to mitigate the loss of Apple as a client by taking up the void left in the Android market, which has been created by the banning of Huawei in the United States.

Captain Trips
Sinclair, one of my cats that likes to hang out around my Macs, says: "Ooh! Ooh! Hire me, I have been in close proximity to Apple devices! I can help you make world beating processors! Really!"

DekuBleep
So Qualcom says Apple can’t compete with them in modem chips but Also says that Qualcom can compete with Apple in ARM chip design?
Score: 18 Votes (Like | Disagree)

Serban55
As long as Johny Srouji is at Apple, no-one can beat Apple...maybe Apples previous generations
Score: 17 Votes (Like | Disagree)

apparatchik
Well, in a year time Apple should be on M3 or its equivalent. All in all this is bad news for Intel, because Qualcomm might start offering M1 comparable chips for the Windows & Linux of the world very soon...
Score: 15 Votes (Like | Disagree)

('https://www.macrumors.com/2021/07/02/qualcomm-ceo-plans-to-compete-with-apple-silicon/')
Amon explained that Qualcomm has decades of experience designing modem chips, which would make it difficult for any rival to replicate its technology.