London Underground passengers will be able to get mobile coverage across the rail network by the end of 2024, it has been announced. 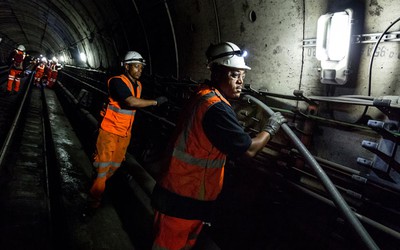 Mobile reception was introduced on the eastern half of the Jubilee line in March last year. TfL says the additional infrastructure will support 5G as well as 4G, but that it will be the responsibility of mobile operators to offer support for the fastest network speeds.

The London mayor, Sadiq Khan, who was re-elected last month, said in a statement:

"I promised Londoners that if they re-elected me for a second term as mayor I would deliver 4G throughout the tube network. It's already up and running on the eastern half of the Jubilee line and I'm delighted to announce today that I am fulfilling that commitment and full internet access will be available across the tube, with key central London stations such as Oxford Circus and Euston set to benefit before the end of next year."

TfL is partnering with BAI Communications (BAI), a global provider of 4G and 5G connected infrastructure, to plug so-called coverage "not-spots" in the underground network. The over 1,242 miles of fibre cabling installed in London Underground tunnels will also benefit above-ground coverage for buildings and other infrastructure by allowing more mobile transmitters to be installed.

Today was 50 years since it started construction. It opened in the early 80s

The London Underground first opened in the 60's...

When was the City Loop built? The Tube is incredibly old so updating any aspect of it is a nightmare, not to mention us Brits are ***** slow at EVERYTHING.
Score: 12 Votes (Like | Disagree)

Azzin
As a Londoner, I do not endorse this news.
Score: 10 Votes (Like | Disagree)

When was the City Loop built? The Tube is incredibly old so updating any aspect of it is a nightmare, not to mention us Brits are ***** slow at EVERYTHING.

And yet we had the first true underground system.....

That's part of the problem. Our infrastructure is old.
Score: 7 Votes (Like | Disagree)

amaze1499
Lucky Londoners. Not off the grid for 2 mins between stations.
Score: 7 Votes (Like | Disagree)
Read All Comments

Tuesday June 29, 2021 11:51 am PDT by Juli Clover
T-Mobile has made it easier than ever for iPhone owners contemplating a carrier switch to test out its network, adding eSIM support to its existing Test Drive Program. As noted by Light Reading (via The Verge), those who have an iPhone that supports eSIM can download the T-Mobile Network Test Drive app to try out the T-Mobile network, a feature that T-Mobile rolled out last week. T-Mobile ...
Read Full Article • 149 comments

Friday July 9, 2021 4:15 am PDT by Hartley Charlton
Apple is working on its cheapest 5G iPhone yet, according to the reliable Apple analyst Ming-Chi Kuo. In a note to investors, seen by MacRumors, Kuo explained that Apple is planning to launch an updated version of the iPhone SE in 2022 that will feature 5G connectivity. The device will apparently be positioned as "the cheapest 5G iPhone ever." The current most affordable 5G-capable iPhone ...
Read Full Article

Tuesday July 20, 2021 8:25 pm PDT by Eric Slivka
The next version of Apple's budget iPhone SE could arrive in the first half of 2022 and look very similar to the current design that's based on the iPhone 8, according to a new report from Nikkei Asia. The main upgrades in the new model will be Apple's A15 chip that will appear first in the 2021 flagship iPhone 13 lineup, as well as 5G support provided by Qualcomm's X60 modem chip. Just...
Read Full Article • 93 comments