HomePod No Longer Available for Purchase From Most U.S. Apple Stores

Almost all of Apple's stores in the United States have stopped offering the HomePod for in-store purchase and pickup, with the speaker listed as unavailable in nearly all retail locations. 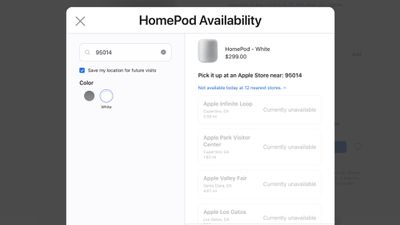 In the Bay Area, for example, there are no HomePods available for purchase, and the same goes for New York City, Los Angeles, and other major cities. There are a couple of stores, such as the San Diego store at UTC that still have stock available, but for the most part, Apple appears to be ceasing ‌HomePod‌ sales in its retail locations.

Note that this applies to the white version of the ‌HomePod‌ only, because the Space Gray ‌HomePod‌ has been sold out for months now.

It is not clear when Apple made this change, but the ‌HomePod‌ is still widely available for next-day delivery in many areas, and it is still available in stores in other countries outside of the United States, such as Australia.

Apple officially discontinued the HomePod in March in order to focus its efforts on the development of the HomePod mini. At the time, Apple said that the ‌HomePod‌ would continue to be available through the Apple Online Store, Apple Retail Stores, and Apple Authorized Resellers "while supplies last."

With the ‌HomePod‌ disappearing from retail stores in the United States, it's possible that supplies of the white version are now dwindling, but Apple may have also simply decided to limit the sales of a discontinued product to the online store.

There are rumors that Apple is working on new HomePod products to accompany the ‌HomePod mini‌, including a ‌HomePod‌ with a display and a camera and a version that combines an Apple TV with a ‌HomePod‌.

currentinterest
My HomePods are among my favorite Apple products. It was a sad day when they were discontinued. Perhaps an innovative replacement will be provided. We can hope.
Score: 28 Votes (Like | Disagree)

kenni417
sad. homepod itself wasn’t a bad product. the price is what killed it… also siri’s stupidness.
Score: 24 Votes (Like | Disagree)

nutmac
Using a stereo paired HomePods with Apple TV 4K (2nd gen) is seriously good. Obviously not as good as higher-end soundbar or home theater system. But miles ahead of most 2.1 soundbars and built-in TV speakers.

If you already have one HomePod, pick another before it's too late.
Score: 20 Votes (Like | Disagree)

Apple should of sold them in pairs for $399, and marketed them as high fidelity home theater.

I have a pair connected to my ATV and these things are amazing.
(New ATVs also let you use them as the audio return channel for your TV.)
Score: 19 Votes (Like | Disagree)

farewelwilliams
can't imagine downgrading to a homepod mini should my homepod break. homepod just sounds so much better than the mini.

hopefully Apple has enough in stock for in and out of warranty repairs/replacements
Score: 17 Votes (Like | Disagree)

MacKid
Such a shame. They were an absolute steal at $199 for the sound you got out of them.
Score: 11 Votes (Like | Disagree)
Read All Comments