Apple today highlighted some winners of this year's Swift Student Challenge, which gives young developers a chance to win special attire and apparel for the annual developer conference. This year, more than 350 winners from more than 35 countries around the world have been selected. 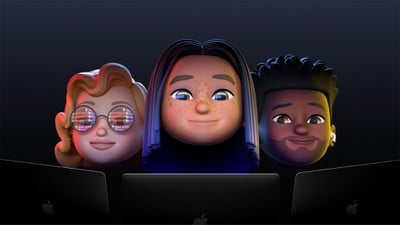 Apple highlights a few developers who have won this year's challenge, including Abinaya Dinesh, who created an app that gives users with gastrointestinal disorders an easy way to access resources and information. Dinesh, at the age of 15, plans to launch her app later this summer.

Lastly, Damilola Awofisayo, at 17 years old, is the developer behind TecHacks, a non-profit organization that aims to create a "supportive environment for girls everywhere to create, problem-solve, and showcase their talents alongside like-minded females to compete and work with."

WWDC will kick off this year on June 7 and run until June 11. The main keynote which will include the reveal of iOS 15, iPadOS 15, macOS 12, tvOS 12, and watchOS 8 will take place on June 7 at 10 a.m PT. With less than a week away left until the annual conference begins, be sure to visit our roundup for everything we can expect.

Jony Ive and Co.
Meanwhile I'm just a useless person on this forum who cant do what these cool kids managed to create, so I'm just interested in this year's apparel, pins and badges ... sigh. Guess Apple's marketing team has brainwashed me into being a useless creature.
Score: 1 Votes (Like | Disagree)
Read All Comments

Saturday June 5, 2021 3:35 pm PDT by Sami Fathi
Less than 48 hours away from the start of WWDC, a new App Store leak suggests that Apple plans to announce a brand new "Mind" app across its different platforms, as well as the introduction of the standalone Tips and Contacts app for Apple Watch, presumably as part of the watchOS 8 update. The leak comes at the courtesy of developer Khaos Tian, who noticed that Apple accidentally updated the ...
Read Full Article • 78 comments

MacRumors Giveaway: Win a Maxed Out iPad Air and a Copy of WALTR PRO From Softorino

Friday May 21, 2021 11:01 am PDT by Juli Clover
For this week's giveaway, we've teamed up with Softorino to offer MacRumors readers a chance to win a fully upgraded iPad Air and a copy of WALTR PRO to go along with it. WALTR PRO is the third iteration of the popular WALTR app that's designed to make it easy to get any file from your computer onto an iPhone, iPad, or iPod touch. It's fantastic for transferring photos, videos, music, and...
Read Full Article • 22 comments