The new Apple TV 4K will begin arriving to customers this Friday, May 21, and ahead of time, orders are now beginning to be marked as "shipped" on Apple's online store. Track your order with others in the MacRumors forums. 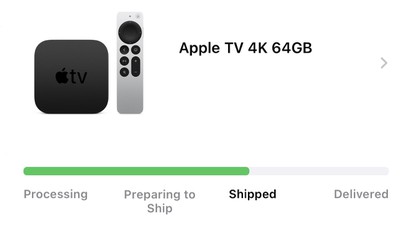 As of Wednesday afternoon, most of the Apple TV 4K orders that have been marked as "shipped" appear to be in Canada, but orders in other countries should start shipping within the next day. Many customers who ordered the new Siri Remote separately are also seeing a May 21 delivery estimate, but we've yet to see these orders begin shipping at this time.

The new Apple TV 4K features a faster A12 Bionic chip, support for high frame rate HDR and Dolby Vision video, and a redesigned Siri Remote with a physical clickpad that is also touch-enabled for swipe gestures that Apple TV users are familiar with. The outer ring of the clickpad supports a circular gesture for finding a scene in a movie or show.

Priced at $179 with 32GB of storage or $199 with 64GB of storage, the new Apple TV 4K will also be on display and available for purchase at Apple Store locations starting May 21, although supplies may be limited on launch day.

MrTemple
Oh Jony, I cannot wait to ditch your remote.

you put designer in quotes as if somehow your opinion invalidates his skill and talent. the man is globally recognized for his design, and was given a knighthood for it. your lack of appreciation for something as meaningless as a remote does not change this. at all.

on the other hand, i'm still preparing to ship here and i ordered at launch. hoping to see this change or UPS update me a tracking info via app soon. thinking to take my chance checking out the apple store app early on friday for store pickup if this doesnt ship for friday.

I put "designer" in quotes because I don't think you can call yourself a "designer" if you are merely an "aesthetic designer". Functional design is critical to good design. And Apple's hardware and software products during Jony Ive's reign at the top (when he had fewer checks against his vision than when he was lower down) show a consistent, steady decline in functional design. Something that Apple is only just now recovering from.

And no amount of laurels from the aesthetic design community is going to change my opinion that Jony's Apple products took a big step backward in functional design.

The ENORMOUS amount of backlash across their line in this regard indicates to me that I am not alone in this.

And no doubt that backstep and that backlash was the reason he was pushed out. Laurels or not.
Score: 4 Votes (Like | Disagree)

Has anyone ordered the larger memory AppleTV, and if so - did you ever use the extra memory?

I still ordered the larger memory option for the Gen 2, because even though I knew I'd probably never need it, $20 was worthwhile 'insurance' against a future feature/option/app that made me regret not getting it.

If you're on the fence don't bother with the bigger memory. Unless you're a nutter like me.
Score: 4 Votes (Like | Disagree)

so long as you acknowledge it's opinion, and valued at absolutely not an ounce more than that. because i dont think you can define what a designer is by conjecture if indeed that is what they are.

regardless of how you "feel".

Thanks for policing my self-awareness that my posts on an internet forum are my opinion. ?
Score: 4 Votes (Like | Disagree)

roncron
Don't know when mine will arrive, but when it does I'm sure it will be EXTREMELY well packed, because they've been "preparing to ship" it for 5 days! Now THAT'S what I call outstanding customer service! ?
Score: 2 Votes (Like | Disagree)
Read All Comments

Tuesday May 18, 2021 5:06 am PDT by Sami Fathi
Apple today confirmed that the new 24-inch iMac, iPad Pro, and updated Apple TV 4K will be available for customers in Apple Stores and retail locations around the world on Friday, May 21. Pre-orders for the products began earlier last month, and Apple previously said the new products will be available in the second half of May. The new iPad Pro features the M1 Apple silicon chip, first...
Read Full Article • 16 comments

Thursday April 29, 2021 7:19 am PDT by Sami Fathi
Earlier today, Apple posted a Newsroom update reminding customers that the new 24-inch iMac, the M1-powered iPad Pro, and the updated Apple TV 4K will be available for pre-order starting tomorrow. Apple has said these new devices will be available in the second half of May, but now, it may have quietly confirmed a specific date. Spotted first by Jason Aten on Twitter, and confirmed by...
Read Full Article • 101 comments