The brand new 12.9-inch iPad Pro will not be compatible with the older generation Magic Keyboard due to a marginal increase in device thickness, according to iGeneration. 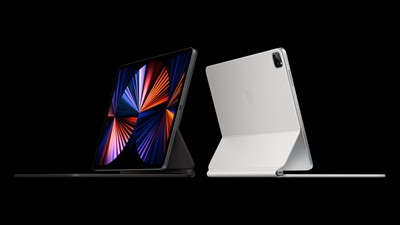 Citing a document given to Apple Stores, the report notes that the new ‌iPad Pro‌ is 0.5mm thicker than the previous 12.9-inch model. Due to the increase in thickness, the new iPad will not work with the older generation Magic Keyboard. While a 0.5mm increase in thickness is small, it is enough for the new ‌iPad Pro‌ not to close properly when put with an older generation keyboard.

With the new ‌iPad Pro‌, Apple is selling a compatible Magic Keyboard, and besides compatibility with the newer and thicker ‌iPad‌, and the availability of a new white option, the new keyboard is believed to be the same as the previous generation.

The new 11 and 12.9-inch ‌iPad Pro‌ which comes with a faster M1 processor, 5G, and the new 12.9-inch Liquid Retina XDR display will be available for order on April 30, but will not begin shipping until the second half of May.

You can shear a sheep many times, but skin him only once.

ssolomon
That may be enough to stop me from upgrading my 2020 iPad.
Score: 48 Votes (Like | Disagree)

If this was a cheap well under $100 basic form-fitting case, ok sucks but ok. The dimensions are slightly different. But this thing was already WAY overpriced.

And they could have left a bit extra space (talking 1-2mm) in the thickness when closing up. There was nothing preventing that like a traditional case that wraps around.

This is intentional obsolescence. Regardless what Apple fanboy sites want to say claiming "There’s no conspiracy to make you buy a new keyboard." Rigghhhhtttt
Score: 48 Votes (Like | Disagree)

macsplusmacs
Uggg. probably a lost sale from me. Esp if the new imacs "pros" do not show up till sept. I love this keyboard so much but at over 2K$ for the new ipad pro i would get, + a new keyboard. will have to pass. can't justify it with owning a similar one right now.
Score: 42 Votes (Like | Disagree)

VforVelveta
This title needs to be changed to say its not "officially" compatible according to Apple. They likely tweaked the design a bit, plus added the white model, but unless they moved the magnets around the old MK will still work.

People have screen protectors and skins and all sorts of stuff on their iPads right now that add up to way more than 0.5mm, and the case closes just fine.
Score: 39 Votes (Like | Disagree)

cannono
Wow. Feel bad for everyone who went out and bought old ones on sale in anticipation that it would work just like the 11-inch seems to.
Score: 27 Votes (Like | Disagree)
Read All Comments

Apple Says New 12.9-Inch iPad Pro is 'Functionally Compatible' With Older Magic Keyboard, But Fit May Be Imperfect When Closed

Thursday April 29, 2021 12:51 pm PDT by Juli Clover
The new 12.9-inch M1 iPad Pro is 0.5mm thicker than the previous-generation version, which has led to fears that it won't be compatible with the older Magic Keyboard. Apple is offering a new Magic Keyboard that offers a perfect fit, but Apple says you can still use your existing 2020 Magic Keyboard with a 2021 iPad Pro. In a Magic Keyboard support document, Apple says the first-generation...
Read Full Article • 198 comments

Tuesday May 4, 2021 11:48 am PDT by Juli Clover
Brydge has been making keyboards for Apple's iPads for years now, and the newest model, the Brydge 12.9 MAX+, is compatible with the third, fourth, and fifth-generation iPad Pro models, so it works even with the new mini-LED iPad Pro. Subscribe to the MacRumors YouTube channel for more videos. In our latest YouTube video, we checked out the new Brydge 12.9 MAX+ to see if it's a viable...
Read Full Article • 103 comments

Friday January 22, 2021 6:43 am PST by Mitchel Broussard
Amazon today is discounting a few of Apple's keyboards for the iPad Pro and iPad Air, starting with the Magic Keyboard for 11-inch iPad Pro at $199.00, down from $299.00. This is the lowest price that we've tracked to date for this Magic Keyboard, which can also be used with the fourth generation iPad Air. Note: MacRumors is an affiliate partner with Amazon. When you click a link and make a...
Read Full Article • 48 comments

Tuesday March 16, 2021 7:51 am PDT by Mitchel Broussard
Today we're tracking a few deals on the iPad Pro and Magic Keyboard at Amazon, which is providing multiple all-time low prices on the 2020 11-inch and 12.9-inch iPad Pro. Likewise, the Magic Keyboard accessories remain at their lowest prices on Amazon this week. iPad Pro Note: MacRumors is an affiliate partner with these vendors. When you click a link and make a purchase, we may receive a...
Read Full Article • 34 comments

Tuesday April 20, 2021 10:59 am PDT by Tim Hardwick
As part of its new iPad Pro unveiling, Apple today also announced the availability of the Magic Keyboard in a new white color. Apple in the spring of 2020 unveiled and released the Magic Keyboard for iPad Pro, which is similar to a Smart Keyboard for iPad but with a built-in trackpad for better navigation with a cursor. The only color it originally came in was black, but Apple is now...
Read Full Article • 72 comments

Tuesday February 2, 2021 5:44 am PST by Mitchel Broussard
Amazon is continuing to discount a collection of Apple's keyboards for the iPad Pro and iPad Air, with the biggest sale centering on the Magic Keyboard for 11-inch iPad Pro at $199.00, down from $299.00. This is the lowest price that we've tracked for this Magic Keyboard, which can also be used with the fourth generation iPad Air. Note: MacRumors is an affiliate partner with Amazon. When you...
Read Full Article • 29 comments