In addition to overhauling the iMac lineup with new M1 ‌iMac‌ options, Apple today quietly added a new feature to the Mac mini. ‌Mac mini‌ buyers can now opt to add a 10 Gigabit Ethernet port to the device for a $100 add-on. 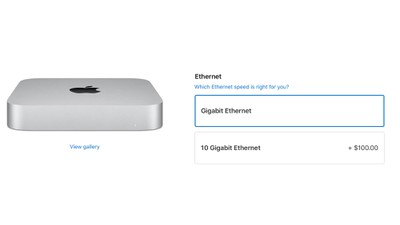 When the ‌Mac mini‌ launched, there was a Gigabit Ethernet option, but no upgrade to 10 Gigabit available.

We were not certain why those parts were listed at the time, but with the addition of 10 Gigabit Ethernet to the ‌Mac mini‌, it was clear that Apple was planning to make it a consumer-available feature.

The new ‌Mac mini‌ with 10 Gigabit Ethernet can be ordered starting today.

How can they, or anyone that buys this, justify the $100 price difference for a part that costs $3 more?

Look up at how much it cost to add a 10 gig Ethernet pcie card and get back to us.
Score: 17 Votes (Like | Disagree)

aforty
How can they, or anyone that buys this, justify the $100 price difference for a part that costs $3 more?
Score: 8 Votes (Like | Disagree)

How can they, or anyone that buys this, justify the $100 price difference for a part that costs $3 more?

MvdM
Does it come with a separate power supply?
Score: 5 Votes (Like | Disagree)

Neil Harrison
Doh I only just got mine
Score: 4 Votes (Like | Disagree)

iDento
I’ll let Samsung, Huawei, and sane Apple fans comment on that, I am out of here.
Score: 4 Votes (Like | Disagree)
Read All Comments