Some iPhone 12 models have been losing color from their aluminum chassis, according to a new report from Svetapple.sk, which includes photos of a PRODUCT(RED) ‌iPhone 12‌ model that has been noticeably leached of color. 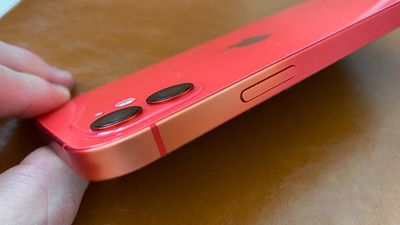 The side of the ‌iPhone 12‌ near the power button has faded to an orange shade and there's a clear delineation where the red coloring has worn off.

Svetapple.sk says that the iPhone has been used in a transparent case, so friction from a hand has not been a factor, though it's not clear if the case itself may have caused the issue.

There have been similar reports of fading from iPhone 11 and iPhone SE 2 users. MacRumors reader t101, for example, shared photos of an ‌iPhone 11‌ with a dramatic loss of color on the edges. That ‌iPhone‌ model had also been in a transparent case. While many of the reports have focused on the Red ‌iPhone‌ models, the fading has been seen less frequently on ‌iPhone 11‌ models in different colors.

Some MacRumors readers speculated that the color fading is due to UV exposure enabled by the clear case, but the problem would likely be more widespread if it was a UV exposure issue. There has also been speculation that the issue could be caused by a chemical reaction with a case, but there's no clear cut explanation.

There are a limited number of reports about color fading, but this is a problem that seems to have persisted for years as there are complaints about the ‌iPhone‌ XR, too. Aside from the ‌iPhone 12‌ photos shared by Svetapple.sk, we have not seen similar reports about color loss on other ‌iPhone 12‌ devices, and this could be a manufacturing defect that's not widespread.

Apple likely considers the color fading to be a cosmetic issue, so it's not known if devices that are suffering from color loss will be replaced.

litmag01
Based on the photo it is clear the customers are holding the telephone incorrectly.
Score: 51 Votes (Like | Disagree)

Who can defend this? Gross, Apple.

Oh, no worries. The usual suspects will be here any second to do just that.
Score: 24 Votes (Like | Disagree)

BarredOwl
Who can defend this? Gross, Apple.
Score: 19 Votes (Like | Disagree)

NotTooLate
so we are at 200,000,000 devices sold between 11 and 12 , and we get some random guy posting a pic of discoloring and this goes straight to the main page and ppl are reacting to this like its a known , wide spread issue with the phone?
Slow day today I guess.
Score: 19 Votes (Like | Disagree)

kevinpdoyle
I think that makes this particular unit look better IMO. But I like my stuff to have a lived in look. ?‍♂️
Score: 8 Votes (Like | Disagree)
Read All Comments

Friday March 4, 2022 7:38 am PST by Mitchel Broussard
Amazon today has a large collection of Apple's official iPhone 13 cases at notable low prices, including select colors of Clear, Silicone, and Leather Cases available from as low as $26.00. These accessories fit the iPhone 13, iPhone 13 mini, iPhone 13 Pro, and iPhone 13 Pro Max. Note: MacRumors is an affiliate partner with these vendors. When you click a link and make a purchase, we may...
Read Full Article • 14 comments

Thursday January 27, 2022 8:32 am PST by Joe Rossignol
For the first time in a while, Apple has started selling a refurbished iPhone 8 model for $359 through its online store in the United States. For the time being, this is now the cheapest iPhone model that can be purchased directly from Apple, but the device is nearly four and a half years old and we strongly recommend considering the second-generation iPhone SE in this price range. Released...
Read Full Article • 80 comments

Tuesday March 22, 2022 9:42 am PDT by Juli Clover
Apple's new third-generation iPhone SE is equipped with the "toughest glass in a smartphone" on the front and back, a change that's designed to make the device better hold up to drops and scratches. Allstate Protection Plans this week put Apple's claims to the test with a series of controlled drops, and found that the third-generation iPhone SE does indeed appear to be more durable than the...
Read Full Article • 56 comments